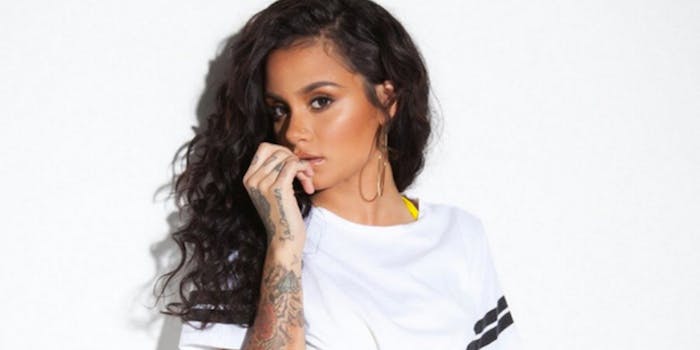 Her hospitalization comes after news of her dating life broke Monday.

Twenty-year-old R&B singer Kehlani was hospitalized late Monday night after an apparent suicide attempt, according to an Instagram post she’s since deleted.

According to TMZ, “emergency responders arrived to her Hollywood home and determined she posed a threat to herself.” She was soon reportedly placed on a psychiatric hold.

Her hospitalization comes after news of her dating life broke Monday, leaving many fans convinced that she was cheating on her boyfriend. The singer had reportedly been dating Cleveland Cavaliers point guard Kyrie Irving as recently as Valentine’s Day, but when her ex PARTYNEXTDOOR posted a pic of he and the singer holding hands Monday, it seemed clear that the pair had reconciled.

The now-deleted photo showed only their hands in bed, with the caption, “After all her shenanigans, still got the r&b singer back in my bed.”

What fans wanted to know was: Had she broken things off with Irving? Was PARTYNEXTDOOR’s pic a nod to the fact that they were having an affair? Twitter and Facebook blew up with people calling the singer a slut and a cheater.

The unexpected attention and social media hostility very well may have contributed to the singer’s hospitalization, because late Monday night she Instagrammed a photo of her arm with an IV, and a very lengthy caption that stated: “I am severely utterly in love with my first love. Went thru a bad breakup and ended up easing into a relationship with a man who was one of my bestfriend [Irving]. Tho we realized we both weren’t exactly at a time where we were prepared to do so… No I’m not a CHEATER, a THOT, im a BELIEVER IN FOLLOWING YOUR HEART and not LYING TO YOURSELF.”

She has since deleted the photo (and every other picture on her account), but screenshots of the post still exist.

#StayStrongKehlani trended in the U.S. all Tuesday morning.

And celebs tweeted their support for the singer’s quick recovery:

man. just heard about kehlani. one of the nicest people ever. i wish good energy and strength for her life.

@kehlani we love you & we praying for you babygirl. You'll be ok.. #trust #lovealways pic.twitter.com/JQ2wJPZlFc