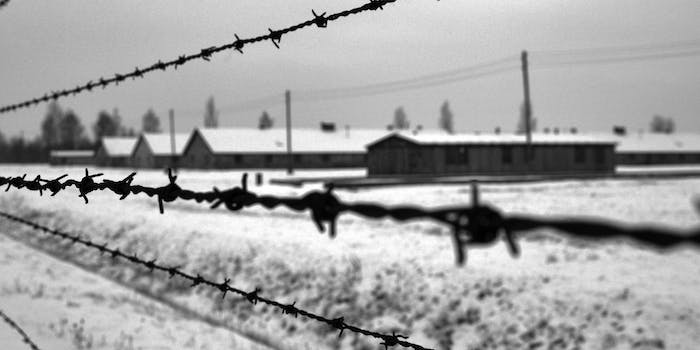 Photo via fedewild/Flickr (CC BY SA 2.0)

It would be impossible to visit Auschwitz and not reflect on its horrors. It appears Katy Perry is no different from the rest of us.

After performing in nearby Kraków, Poland, on Feb. 24, Perry made the short trip to Auschwitz, the World War II concentration camp where more than 1.5 million people were slaughtered. In a very short and poignant posting to Instagram, along with a picture taken outside the camp’s barracks, Perry wrote:

My heart was heavy today.
For ever let this place be a cry of despair and a warning to humanity, where the Nazi murdered about one and a half million men, women and children mainly Jews from various countries of Europe.

My heart was heavy today. For ever let this place be a cry of despair and a warning to humanity, where the Nazi murdered about one and a half million men, women and children mainly Jews from various countries of Europe. Auschwitz – Birkenau 1940-1945 "The one that does not remember history is bound to live through it again" George Santayana

She then followed with the quote from philosopher George Santayana which is inscribed on a plaque at Auschwitz:

“The one that does not remember history is bound to live through it again.”

Whether or not the singer had help composing these thoughts, it’s difficult to the disregard her display of empathy. Perry’s Instagram posting—liked by more than 522,000 people—became a catalyst for commentary for those touched by her social media tribute as well as those who took the opportunity to spew hatred or even irrational thoughts:

@gosiek1101 I was there.Terrible…did not even have the words to describe it.I thougt that these “stars” have no memory of the atrocites of Hitler and the Germans.Sad but true.So in general,i hope you will enjoy thr time you spend in Poland.

@greenplanethealthandhome Unfortunately, history in this world makes the identical mistakes over and over again without learning the lesson, this is obviously NOT working, how many more times does God need to show you this??

@magdalenamonster “thanks for sharing darling, i went to your concert in Cracow and you were amazing. Everyone in Poland is so thankfully for you for sharing is. This is so important for us cause  people tell so many liars about holocaust and aushwitz 😢 You are amazing!”

@cutte_giirl “@demi_britten I do not care. But the argument is why kill children, women and men of Palestine Muslims and steal their land?”

@adipiaskowski “I wish there were more people like you. Now all your followers maybe understand why we need to protect our country every day”

Perry’s quick yet meaningful message from Auschwitz has significance for two important reasons. For one thing, Perry chose not to go the controversial route (as others have), and take a selfie at the notorious death camp. Whether it was a matter of respect, we’ll never know, but by avoiding the narcissistic approach, the meaning of her words have greater impact.

Also perhaps unintentional, Perry’s moment of Instagram-based reflection comes at a time of growing anti-Semitism in Europe. Any mention of Jewish life, history, or culture in a positive light represents a small, flickering candle of hope for greater religious tolerance for all.

Photo via fedewild/Flickr (CC BY SA 2.0)