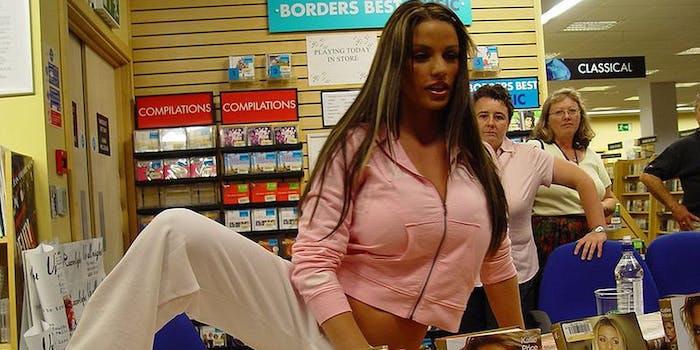 We've seen livetweeted breakups, but the first-person perspective is a gamechanger.

Twitter has certainly become a place to record emotional turning points in life. So far, we’ve seen livetweeted births, livetweeted deaths, and livetweeted breakups of at least two couples, albeit by impartial third parties. Now, one British personality has apparently livetweeted—in the first person—her decision to divorce her cheating husband.

Katie Price, best known for her modeling career and reality television appearances under the pseudonym Jordan, has spent most of her life in front of cameras and in the spotlight. So when she allegedly caught Kieran Hayler, her husband of just over a year, in bed with best friend Jane Poutney, she decided to share that part of her life in real-time too: She took to Twitter to detail the whole sordid affair to her 1.9 million followers.

The announcement, however, was just the beginning. Price’s tweets quickly escalated to a no-holds-barred series of emotional rants.

Jane pountney is 50 next year cloned into me with my help she is a whore , home wrecker slut

Once the angry tweets subsided, she worked her way to the next stage of grief and began to express her feelings of hurt at the revelation.

No human being deserves this especially being 6 months pregnant

Worse pain in the world

Everyone, be wary of how you treat your spouses, lest you be subject to such (warranted) public shaming.