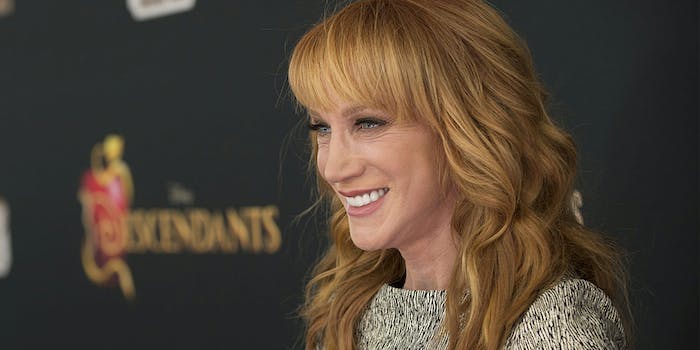 Kathy Griffin says these emails are proof Hollywood blacklisted her

She believes a rescinded offer for a speaking gig is proof.

Kathy Griffin lost her job at CNN after participating in a photo shoot with Donald Trump’s head earlier this year, but she believes the stunt has also resulted in her being blacklisted by Hollywood after she had a speaking offer rescinded.

She shared screenshots of several emails between her and her former publicist Steve, who was trying to coordinate Griffin to deliver opening remarks at the Hollywood Reporter Power 100 Women in Entertainment breakfast.

“I’ve attended this event numerous times, including last year when they honored Megyn Kelly (and yeah…I playfully flipped her the bird when she continued to praise Trump),” Griffin wrote. “I was honored to FINALLY have my chance to take the mic at an event I admired and to address my peers directly.”

The original offer came in on Sept. 26, and several days later Steve assured Griffin that he was still working to secure the speaking gig. But by Oct. 12, the Hollywood Reporter was no longer offering her the gig. According to Steve’s email, “They are very supportive of you and want you to do something at another event, says they completely went overboard and too long w/people speaking.”

Griffin took the rescinded offer as a sign that she was being blacklisted in Hollywood for her controversial photo shoot.

“I can’t help but take this as another occasion where Hollywood is blacklisting a woman and silencing her,” Griffin wrote. “After decades of hard work in this industry, it’s my opinion that this is not right nor justified. Yeah, I took one photo holding up a children’s Halloween Trump mask with ketchup on it…so what? How’s that feigned outrage working out for you now in light of a possible impending nuclear holocaust?”

She believes the incident—and the lack of public support—has effectively killed her career, and while she doesn’t believe that she’ll have “one single day of paid work ahead of me in the United States for the rest of my life,” she pledged to fight for those who didn’t have voices.

“In any way possible, I will of course continue to champion those without voices and those who are disenfranchised, with the hope of being able to do my job,” she said.