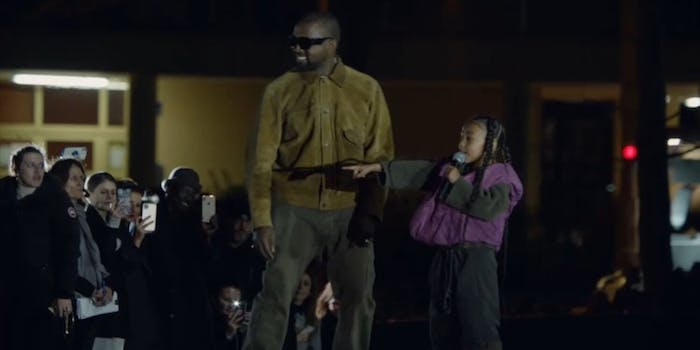 Young YouTube star ZaZa scored a huge hit on the platform last year when she released the “What I Do” rap song that so far has accumulated more than 13 million views. Apparently, the young daughter of Kanye West and Kim Kardashian is also a big fan.

And North West made that evident at a recent Yeezy fashion show when the 6-year-old child seemingly performed a remixed version of ZaZa’s big hit.

See if you can spot the similarities between 5-year-old ZaZa’s song and North West’s performance.

in July of 2019, ZaZa & her dad went into the studio for the ultimate experience! To finally begin making the music she wanted to make. We take PRIDE in creativity, and believe whether a child’s involved or an adult… creativity deserves RESPECT/homage! What @kimkardashian (Kanye west) are doing with their daughter… with the inspiration of ZaZa & our family in mind is okay… we not mad BUT

PLS SHOW LOVE AND SUPPORT TO THE ORIGINAL FIRST!!! We admire Kanye west, and adore his journey. However, we don’t wanna feel like our daughter’s journey in the world of entertainment is being STIFLED .
.
THANK YOU!

As noted by Cosmopolitan, Kardashian wrote in a comment to that post, “We love you, North is a huge fan and records in the studio all the time with her dad and is inspired by ZaZa and loves Lay Lay too! Today’s performance of North’s remix of ZaZa’s song was something she asked to do at the last minute and a complete surprise. I didn’t mean to not give credit where credit was due. Would love for the girls to meet soon.”

Now, it appears ZaZa and North might get together for a playdate soon. As such, the world will hold its breath to see what kind of music collaboration the two produce when they meet in real life.