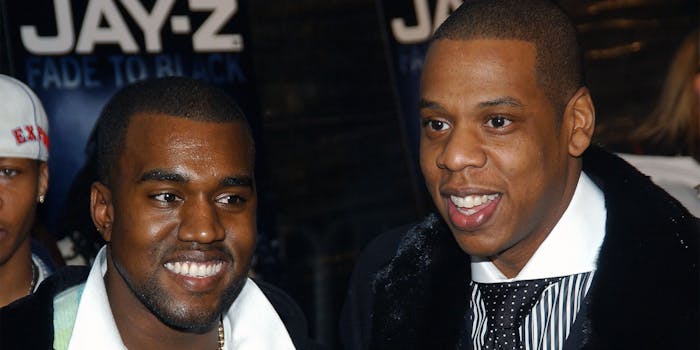 Jokes from the photo aside, it appears they have made up and are back to doing business at TIDAL together.

Kanye West and Jay-Z’s relationship has been less than stellar since their massive public fall-out. The Watch the Throne duo have since exchanged salvos both overt and subliminal for years now. It’s been reported that West’s litigation against Hov’s TIDAL over royalties initially exasperated their split. That’s all been resolved, according to TMZ, with a settlement reached earlier this year.

With their business relationship reconciled, West and Hov made nice at Diddy’s luminous black-tie 50th birthday bash, at least for this weekend. They posed for some photos and stayed cordial, at least for their friend’s sake. A couple of pictures, though, made it onto the interwebs with Jay almost completed unenthusiastic while standing beside Diddy, Pharrell, and Kanye–like everything was all good. It clearly was not, and thus, a meme was born.

50 Cent was among those to take advantage of the meme.

It does appear that Kanye and Jay had a brief exchange of pleasantries, surely trying to keep things kosher and out of the awkward zone.

A little exchange between Kanye and Jay Z at Diddy’s 50th pic.twitter.com/GtFyFEyYtV

Deep down I want Diddy to lock Up Jay Z and Kanye West In A Room so that they can Sort out whatever Issues they have.
This brotherhood Is beautiful ❤ pic.twitter.com/3OXYSI8TAL

But the meme truck had already back up onto the social media docking station:

Kanye and Jay Z Look like boys forced to church by their daddy (Diddy) pic.twitter.com/5BL8dqZk9e

This was probably the most appropriate use of the meme: