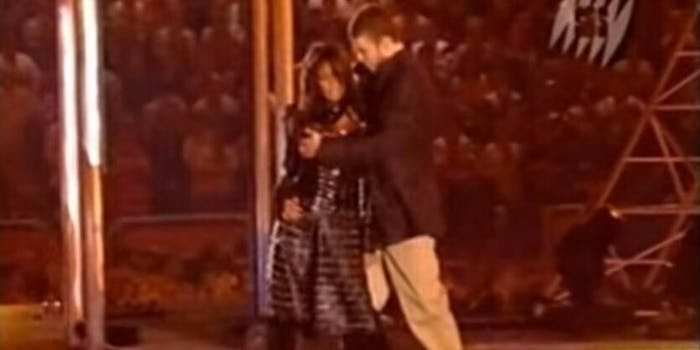 Justin Timberlake to perform at Super Bowl, and Janet Jackson fans are livid

Why does he get to perform?

Thirteen years after the most infamous moment of any Super Bowl halftime entertainment show, one half of the duo that created Nipplegate has been invited back to perform. The other half, Janet Jackson, has not.

And now that the NFL has announced Justin Timberlake as the halftime performer for Super Bowl LII in February, the internet wants to know why Timberlake is OK to return but Jackson is not.

Their 2004 performance, in which Timberlake ripped off Jackson’s costume to reveal her pierced nipple, brought the term “wardrobe malfunction” into the lexicon.

Amid the massive controversy at the time, Timberlake said it was an accident and later apologized, while Jackson said, “It was not my intention that it go as far as it did.” Her representatives explained that a red lace bra was supposed to be revealed and not her entire breast.

But Timberlake has now been exonerated, and Twitter users were outraged that the same sense of forgiveness has not been extended toward Jackson—who, according to TMZ in this 2014 report, is still blacklisted from performing at the Super Bowl.

Unless Justin Timberlake starts his set by introducing Janet Jackson with an apology and then continues watching quietly while she does 12 minutes of her catalog solo, the Super Bowl can keep this halftime show.

Congrats on getting the Super Bowl halftime show, @jtimberlake. Invite @JanetJackson for a duet. You, uh. Kinda owe her. pic.twitter.com/fqaSelN0Rj

Soon after the news broke, the #JusticeForJanet hashtag was created on Twitter.

During the reveal on Sunday night, NBC showed a taped interview with Justin Timberlake when Mike Tirico asked, “At any point … did [the NFL] say, ‘Hey, last time, there was a little wardrobe thing. Can we make sure that doesn’t happen?’”

Said a chuckling Timberlake: “Yeah, that won’t happen this time.”

Update 4:15pm CT, Oct. 23: According to TMZ Sports, via the Big Lead, Jackson actually is not banned by the league. So, it sounds like it’ll be up to Timberlake whether to bring back Jackson.

“We are not going to comment on any speculation regarding potential guests,” the NFL told TMZ. “There may be no guests. Along with Pepsi, we’re excited to have Justin Timberlake.”