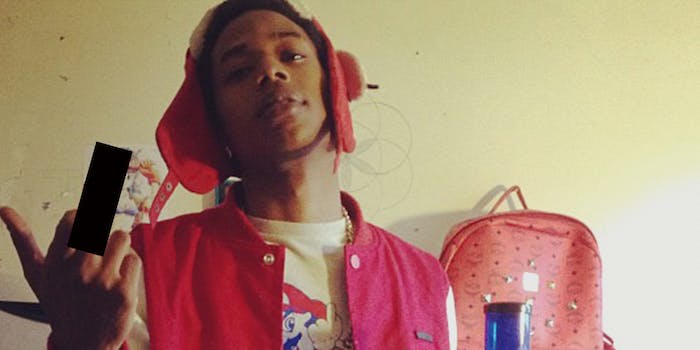 The anime-obsessed rapper who rules 4chan

/b/ seems like the last place any black, 20-year-old rapper would think of promoting his music. But for Josip—real name Josip Opara-nadi— it was the perfect match.

That’s because Opara-nadi is the Internet’s otaku rapper. Instead of fast cars and fast money, he’s obsessed with Japanese anime.

“The Internet is a huge jungle but at the same it’s so important to Otaku and so important to life,” Opara-nadi told the Daily Dot from his home in Jackson, Miss. “So I knew that if I could gain access to the Internet by just being natural, then I could get these people to see who I was. Let me make a good-ass song and explain what people on 4chan do. I guess the people on 4chan liked it.”

Opara-nadi has frequented 4chan since he was 12 years old, but he never expected the site to embrace his music—especially since 4chan’s original purpose has long been eclipsed by its most controversial imageboard, /b/.

4chan was founded in the fall of 2003 by Christopher “moot” Poole, then a 15-year-old living in his parents’ New York City apartment. He envisioned the site as an American spinoff of Futaba Channel (2chan), a Japanese message board.

In its early days, 4chan offered a place for anime fans to share comics and images. The first two imageboards Poole created were /a/ (anime), and /b/ (random). Over the next nine years, /b/ would overshadow /a/—and the rest of 4chan—with its high profile hacks, vote-rigging vendettas, and justice-seeking brigades. It can also be one of the most racist forums on the Internet, featuring frequent threads about “n**gers.”

Despite all this noise, Opara-nadi felt right at home on /a/.

Through anime classics like Dragon Ball Z and FLCL, and an almost academic obsession with Tokyo district Akihabara (which he described as “a Disneyland for anime”), Opara-nadi got hooked on otaku culture.

The term “otaku” is generally used to describe “Japanese enthusiasts of animation and manga in the early 1980s,” scholar Lawrence Eng writes in “The Origins of ‘Otaku.'”

The literal definition of the word, on the other hand, has resulted in these superfans being criticized and mocked.

“Another common theory about the term ‘otaku’ is that it refers to the fact that otaku rarely leave their homes, since ‘otaku’ literally means ‘your home’ as well as ‘you’ (formal),” Eng explains. “This proposed etymology of the term is generally used in a deprecating manner, negatively stereotyping otaku as being antisocial and isolated from the world at large.”

With his wealth of otaku knowledge and his musical talents, Opara-nadi began recording at home, but his music went mostly unnoticed for years. That all changed last spring with the help of the biggest Dragon Ball Z fan on the planet.

The video opens with a scrawny black teenager starring into the camera, explaining how all he ever wanted to be when he grew up was a Super Saiyan, one of Dragon Ball Z’s superhumans who summon their power by yelling at the top of their lungs. YouTube user KillaKarisma confesses that he feels “worthless” and wishes he could be as powerful and exciting as the superheroes he idolizes.

“I feel like anything you set your mind to, your mind can create that force,” KillaKarisma explains from his bedroom in Atlanta. “Because your mind is this powerful machine. Whatever you set it to, and you believe, and you work toward achieving it, you can do it. I believe I can be a Super Saiyan.”

At about the 3:40 mark in the video, KillaKarisma makes good on his promise by popping his shirt off and letting out a primal scream you’d never imagine a kid of his size could produce.

KillaKarisma’s video has since been seen more than 7.6 million times on YouTube. At least one of those views came from Opara-nadi.

But while most of those millions of viewers mocked Karisma, Opara-nadi recognized him as a kindred spirit.

“Anime Pussy” collected more than 50,000 views in its first 24 hours, and ultimately caught the attention of 4chan moderators. They contacted Opara-nadi and asked if they could feature the video on the site (which, according to Alexa, ranks in the top 400 most visited in the U.S.). By the end of the month, it had collected 200,000 views.

A year later, Opara-nadi released “4chan,” an ode to the site that helped shape his otaku obsession. Moderators once again let his music autoplay for anyone who visited 4chan.

Despite his apparent sincerity, /b/ wasn’t sure if the rapper was serious or just a master troll.

In the end, it doesn’t matter—Opara-nadi is making music his full-time job. And although it’s a full-time job he has yet to collect an honest paycheck from, he’s not discouraged.

Will Opara-nadi ever achieve this level of success? He thinks so.

On the hook of “4chan,” he calls himself Otaku Kami-sama—”Otaku God”—and that combination of geeky obsession and braggadocio is more than just a punchline. It could be enough to inspire his fellow otaku to stop hiding from the world and take pride in their hobbies.

“I wanted to be an otaku leader,” Opara-nadi says. “I knew I could encourage them to believe in what they love more by making music.”