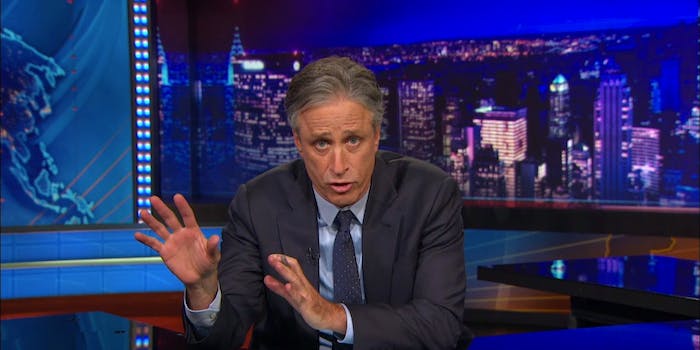 After being away from 'The Daily Show' for a week, Jon Stewart is having his say.

Jon Stewart picked a hell of a week to go on vacation.

Comedy Central’s announcement that Daily Show correspondent Trevor Noah would be taking over his chair went off without a hitch last Monday, but that same night people started discovering some of Noah’s more problematic tweets from the past few years about women, domestic violence, and Jews. Comedy Central stood by his side, saying that “to judge him or his comedy based on a handful of jokes is unfair.”

To reduce my views to a handful of jokes that didn’t land is not a true reflection of my character, nor my evolution as a comedian.

But after returning to the show this week, Stewart finally took on the Noah controversy. He’s standing by his successor, and he hopes that Noah will earn the audience’s trust just like he did when he first started out.

“I do hope you give him an opportunity to earn that trust and respect because my experience with him is that he is [an] incredibly thoughtful and considerate and funny and smart individual,” Stewart said. “And man, I think if you give him that time it’s gonna be well worth it. I’m excited for where he’s gonna take his thing.”