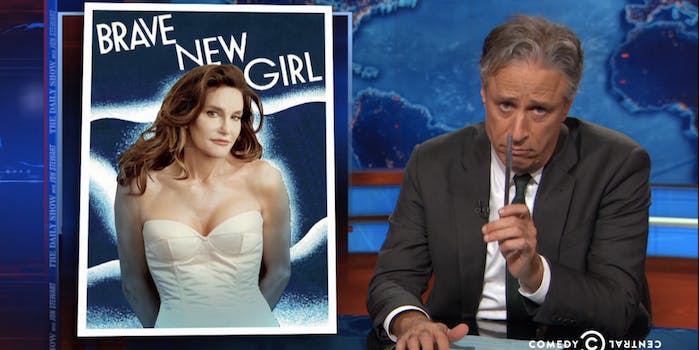 Welcome to being a woman, Caitlyn.

Jon Stewart delivered the perfect takedown of how the media have portrayed Caitlyn Jenner’s transition on The Daily Show on Tuesday.

Stewart is known for his brilliant news commentary, but his commentary on Caitlyn Jenner’s coverage is especially spot-on. Stewart takes sharp aim at petty media trends, and reveals a lot about what’s wrong with the way we treat women today in America.

As Stewart puts it, we haven’t just accepted Jenner as a woman; we’re wasting no time in treating her like one.

The first huge trend to emerge has been to call Jenner “beautiful.” While praising Jenner for her good looks may appear supportive, Stewart sharply points out that it’s a totally reductive path.

“You see, Caitlyn, when you were a man, we could talk about your athleticism, your business acumen. But now you’re a woman; your looks are really the only thing we care about!”

“We want to give a woman a compliment here; we just want to make sure another woman gets taken down a peg in the process!” quips Stewart.

Then Stewart points out the final phase of the transition: Reminding a woman she has an expiration date. Many were quick to point out how good Jenner looks “for her age.”

“You came out at 65. You’ve got another two years before you become invisible to society,” chides Stewart.

Finally, Stewart congratulates Jenner and welcomes her to being a woman in America.