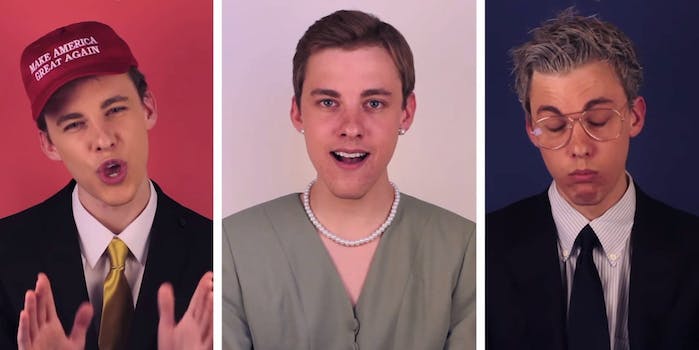 Clinton, Trump, and Sanders engage in a fire rap battle

Donning Hillary Clinton’s prim pantsuits, Bernie Sanders’s thick spectacles, and Donald Trump’s orange complexion, Cozart imitates the remaining presidential candidates in his latest video as they attack each other in a “politiclash” debate.

Cozart even manages to poke at a few politicians and businesspeople formerly in the running.

“So we’re supposed to elect you just because you’re a woman? You’re less likable than Cruz, and he looks like a melting snowman,” Cozart raps as Trump.

While Clinton is flanked by what appear to be secret service agents during her fire verses on husband President Bill Clinton’s mistake with “the wrong brunette” and her Benghazi drama, a few Trump fanatics sidle up to Trump as he boasts of giving “permission to let Americans hate again.”

Sanders too has his Bernie bros in tow as his rhymes bolster his reputation for engaging young voters with a grassroots campaign.

“If you got a couple millions, you’ll be revolu-shunned,” Cozart’s Sanders raps in one final swing. “I got 99 problems, but my percent ain’t one.”