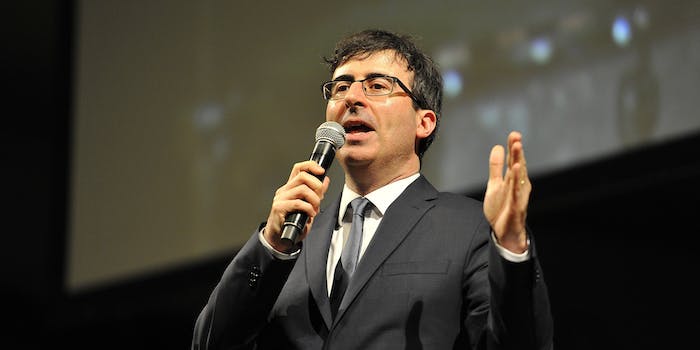 'He’s an open book, and that book doesn’t have many interesting words in it.'

While many late-night talk show hosts, cable news networks, live variety programs, and political commentators are keen on getting Donald Trump on their shows (and that Trump ratings boost), there’s at least one host who has appears to have no interest in hosting Trump.

Last Week Tonight host John Oliver—who has yet to dedicate a full segment explicitly about the 2016 presidential election on the show—addressed the elephant in the room Friday on CBS This Morning. When asked if he endorsed Trump in any way, Oliver said that he doesn’t “really care about him in any capacity.” Pressed further about whether he’d invite him on Last Week Tonight, Oliver doubled down on his stance.

“I haven’t really got anything to say to him,” Oliver explained. “There’s nothing—he’s said everything he wants to say. He has no internal monologue, that man. So it’s not like you’re going to find the secret nugget he’s been holding back. He’s an open book, and that book doesn’t have many interesting words in it.”

Trump, who is more than in-tune with what’s being said about him in the news, got wind of what Oliver said about him. He then claimed that Last Week Tonight had invited him onto the show (despite Oliver’s indifference to him) but he turned it down, blaming the “boring” show and low ratings.

.@thehill John Oliver had his people call to ask me to be on his very boring and low rated show. I said "NO THANKS" Waste of time & energy!

Last Week Tonight’s social media accounts replied straight to Trump’s tweet Sunday with two comments to Trump’s claims: While it doesn’t deny Trump’s claim that the show is boring, it never invited the Republican candidate onto the show.

A couple of points…
1. Yes, we have a boring show.
2. At no point did we invite Donald Trump to appear on it.https://t.co/qjpg9FLb0V

Also worth mentioning: No matter the TV ratings, Oliver’s a massive hit online. His Last Week Tonight videos have been viewed nearly half a billion times on YouTube alone.