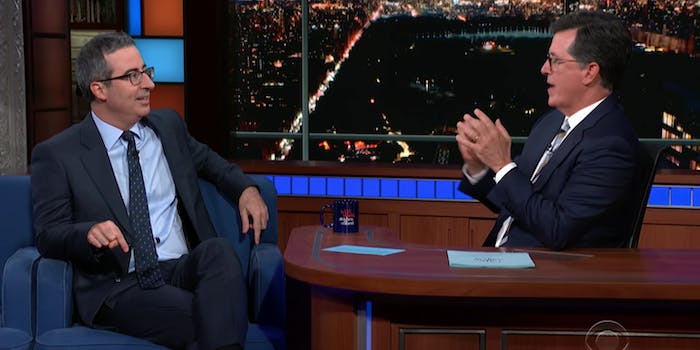 Beyoncé was photoshopped in.

In a recent appearance on The Late Show with Stephen Colbert, talk show host John Oliver confirmed the rumors that Beyoncé had been photoshopped into the Lion King cast photo.

Oliver, who is part of the BeeHive himself, told Colbert that nearly the entire cast of the Disney live-action remake was there for the cast photoshoot… except for Beyoncé.

Many fans had speculated that the Queen B was photoshopped due to the distance between her and the other cast members. And it turns out they were right.

“Yeah,” Oliver admitted to Colbert and the audience. “She wasn’t there.”

But this fact shouldn’t surprise anyone. Beyoncé is one of the busiest people in show business. At least she was photoshopped into the photo, compared to John Kani (Rafiki) who was completely left out.

“If you look at my face, I look really intimidated,” Oliver said. “And that’s because what I’m doing is imagining that I’m about to be put in a photo with Beyoncé.”

The Lion King has gone on to break box office records and has already earned a half a billion dollars in the box office.

Despite staring in the feature film together, Oliver still has yet to meet the pop icon in person.

Maybe the next remake, John.