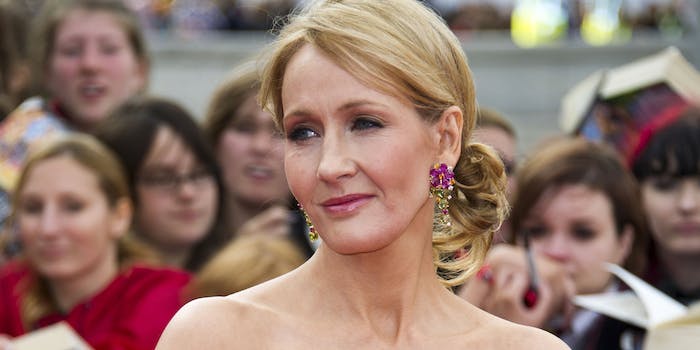 J.K. Rowling slam-dunks the burkini debate with one tweet

She gets straight to the point.

The world watched in horror Wednesday as photographs surfaced of French police in Nice threatening a woman with pepper spray and forcing her to remove her clothes due to the town banning burkinis—a swimming outfit worn by some Muslim women. But the response from France’s president is sparking even more outrage from critics about how we police women’s bodies.

In an interview with French magazine Le Figaro that’s set to be published Friday, Nicolas Sarkozy, the former French president who is in the 2017 presidential race, denounced burkinis and called them a “provocation.”

“Wearing a burkini is a political act, it’s militant, a provocation,” Sarkozy, who pledged to ban all religious symbols from French universities once president, said. “If we do not put an end to this, there is a risk that in 10 years, young Muslim girls who do not want to wear the veil or burkini will be stigmatized and peer-pressured.”

Those in favor of the law argue that it’s protecting “good morals” and French secularism as well as women who may be forced to cover their bodies, but critics argue that policing women who choose to wear burkinis are just as bad and it’s yet another attempt to police what women wear.

J.K. Rowling, who’s become rather vocal on Twitter in recent years, boiled the debate into a single, depressing point: No matter what women wear, they will still be blamed for anything that happens.

So Sarkozy calls the burkini a 'provocation.' Whether women cover or uncover their bodies, seems we're always, always 'asking for it.'

The law is being examined by France’s highest administrative court after the French Human Rights League requested that it be removed.