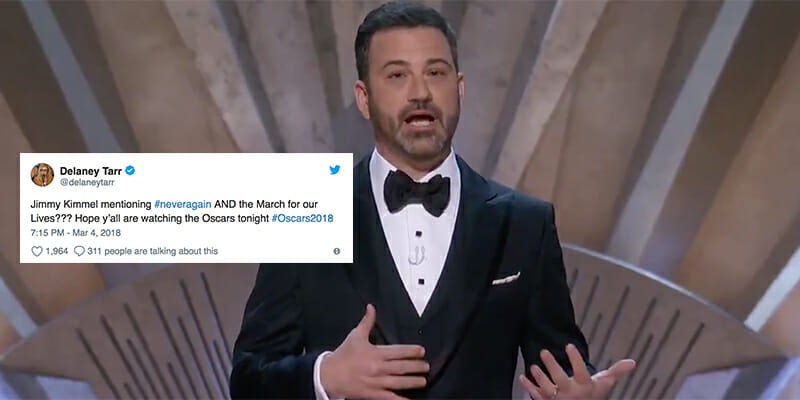 He played it safe.

Last year’s Oscars ceremony ended in a chaotic mix-up, and it seems like the goal of this year’s Academy Awards is to not end in disaster. Host Jimmy Kimmel’s opening speech certainly had that goal in mind, playing it safe even with a joke about Harvey Weinstein, prods at the nation’s top politicians, and a comment about the Parkland shooting.

#MeToo has been an incredibly important conversation about sexual harassment in the film industry this year. While Kimmel had previously said he wouldn’t be joking about the movement, he did manage a jab at disgraced producer Weinstein. Kimmel said Oscar (as in the statue) is the best-behaved man in Hollywood.

“He keeps his hands where you can see them and most importantly, no penis,” Kimmel said. “He is truly a statue of limitations. And that’s the kind of men we need more of in this town. Here’s how clueless Hollywood is about women. We made a movie called What Women Want, and it starred Mel Gibson. Kind of all you need to know.”

‘We don’t make films like Call Me by Your Name to make money,” Kimmel said of the Best Picture-nominated film. “We make them to upset Mike Pence.”

The nod to the high school shooting in Parkland, Florida that left 17 people dead on Feb. 14 was perhaps the most powerful comment from Kimmel of the night. He made a shout-out to #NeverAgain and the anti-gun violence march taking place March 24 in Washington, D.C.

Jimmy Kimmel mentioning #neveragain AND the March for our Lives??? Hope y’all are watching the Oscars tonight #Oscars2018