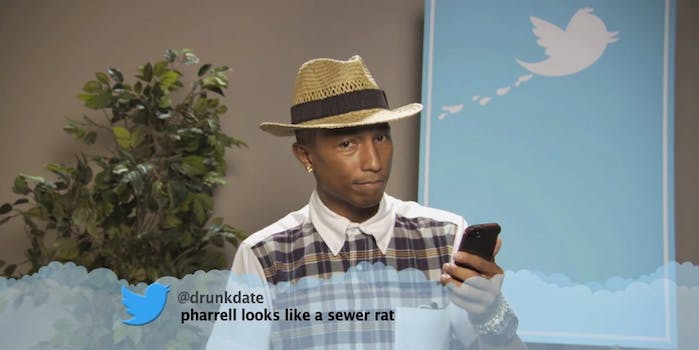 Good news: Some of the tweets are unverifiable. Bad news: There's a whole lot worse out there.

Jimmy Kimmel is at it again.

In light of his interview with Kanye West on Jimmy Kimmel Live, Kimmel released yet another edition of “Mean Tweets,” a recurring segment in which celebrities read the terrible things people say about them on Twitter.

The Internet remains wary of the late-night host (and viral king). Kimmel may not be a journalist (or play one on TV), but he’s led us astray before. Just last month he revealed that the viral video “Worst Twerk Fail EVER” was in fact a hoax. With one little act, he proved that one of the most important rules of the Internet was still in place: You can’t believe everything you see online.

Now, whenever something viral comes out, people hypothesize that Kimmel was behind it; he even had to state that his rap feud with West wasn’t a publicity stunt. Even Kimmel’s “Mean Tweets” segments have come under fire for not being entirely accurate. Gawker tried to verify every single tweet found in the first four sessions, and the more popular the segment got, the more some of those tweets seemed dubious or fake.

In honor of this music edition of “Mean Tweets,” we wanted to verify those tweets for ourselves. But regardless of whether the specific tweets are real, plenty of people will always passionately defend the music they love and mercilessly bash the artists they love to hate.

I hate when people ask me why i hate @selenagomez.. Like I just do.

According to @youseralusi, Twitter deleted her tweet and then she retweeted the insult that got her 15 minutes of fame, but her entire feed started after “Mean Tweets” aired. I remain doubtful.

I wasn’t able to find the tweet in question, but @Kendra305’s reaction (as well as a manual retweet from November 2012) support that this one is real. And even if this specific one isn’t, other users have long accused Legend of looking like a crybaby.

There might not be a handle used in the tweet like the video said, but otherwise this one checks out; @fknsteven confirmed as much to Perez Hilton.

With more than 2,000 tweets on hand, it’s probably safe to say that @lindscw existed prior to the segment, but her account has been made private. That might have been due to Demi Lovato’s fans coming out in full force and attacking her on Twitter for insulting the singer (and misspelling her name).

It’s another example of replacing the celebrity’s name with a Twitter handle, but this one’s real. However, @TrainedHedonist isn’t responding to Twitter hate, if he received any.

The Twitter account in question doesn’t exist, but it did at one point. With a Twitter search, it suggests that the user changed the handle at some point (but used the same one on Instagram).

If you think that @glenyrd regrets what he said now that he’s been called out on national television, think again.

of all mother fucking things….. THIS is what i get famous for? i want a refund @JimmyKimmelLive @jimmykimmel @Pharrell

@drunkdate is answering critics for the tweet she sent, and although we couldn’t locate it, she is just annoyed that out of all her tweets it’s that one that gained attention.

John Mayer looks like a booze soaked turd wrapped in a Dumb and Dumber tux.

Fortunately, this burn wasn’t something concocted by Kimmel’s writers.

Thinking of unfriending everyone on Facebook who’s status update is “Kid Rock concert was awesome!” Have a little respect for yourself.

I’m not sure why part of the username was blurred out; Jimmy Kimmel Live never had a problem hiding Twitter handles before. But yep, this one’s real.

The account has been mentioned as recently as two months ago. However, it is no longer live so we can’t tell whether that account actually tweeted to Hawthorne.

Kimmel left out that the tweet was a reply, but @Raadedendron did send out that tweet earlier this year.

@Gajeel_BlueFox They just read your tweet on #JimmyKimmel lol

Sometime between the segment airing and now @Gajeel_BlueFox deleted his Twitter account, but from the looks of it, he didn’t even remember hurling that insult toward the Backstreet Boys.

Tbh im honored big Sean read my tweet on jimmy Kimmel. Of all the hate he gets and they chose me. Hehehee

@kookychick11 sent out that tweet, and she’s owning it.

@BradPaisley I don’t know your music cause I don’t drive a pickup and I don’t sleep with my sister.

Another one with a partially censored handle. But with a simple Google search, I found a retweet of @stevesmithsays’s burn. It’s suspicious that the tweet came just hours before that broadcast, but he’s been using Twitter long enough to not jump to the conclusion that it’s fake.

Katy Perry is the perfect example of fit but fucking annoying as fuck.

Confirmed from 2012. And in case there was any doubt, while I was searching, I found dozens of others who describe Perry as “annoying as f**k,” so it’s not an unpopular opinion.

Blurred yet again, but by using Twitter’s Advanced Search option, this one came up quite easily.

My big question about the Fall Out Boy reuinion crap- is Pete Wentz still a twat?

The @falloutboyreunion handle doesn’t exist (it’s over the 15-character limit), but the tweet does.

So it looks like Jimmy Kimmel wasn’t pulling our collective leg too hard with this one. But viewers would do well to remain on high alert with him anyway, because just when we start to trust him again … that’s when the trickster could strike again.