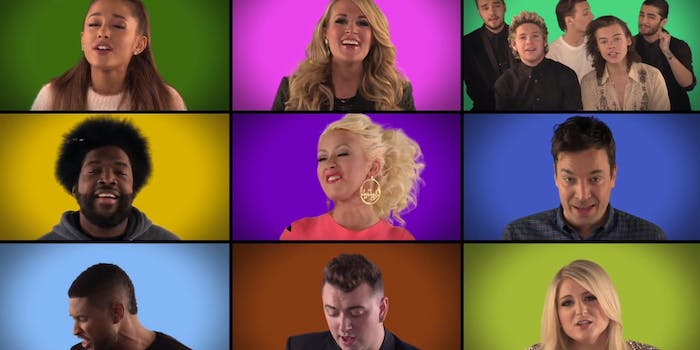 It's got even more celebrity shenanigans than usual.

While the Patriots spent most of last night in celebration mode after winning the Super Bowl, it was business for Jimmy Fallon on The Tonight Show, with the football-themed shenanigans front and center.

First, to celebrate the victors, Fallon and a slew of celebrities collaborated with the Roots on an a cappella cover of “We Are the Champions,” the quintessential victory tune. While perfectly enjoyable, one might argue it suffers from a little too much star power, as everyone tries to make the differing voices and personalities—some of whom will probably never duet together in any other way—click.

While a cappella was the pregame show, the main event was a giant lip sync battle between Fallon, Kevin Hart, and Will Ferrell. What started off as the usual fanfare between the trio transformed with an assist from an old friend of Fallon’s, producing a victory (as well as actual clothing damage) and ending with someone possibly doing Katy Perry better than Katy Perry.

“You can never unsee that,” Fallon says at one point. Especially when you can rewatch it on YouTube.