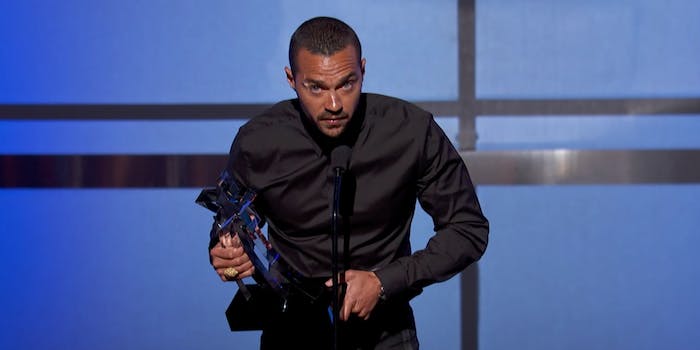 It hasn't gotten much traction so far.

Grey’s Anatomy actor and activist Jesse Williams brought down the house last week at the BET Awards with a politically powered acceptance speech. But not everyone was inspired by it—and some are even calling for his job.

Accepting the Humanitarian Award onstage, Williams, who has a long history of advocating for social justice, addressed cultural appropriation and spoke out against police brutality—pointing out that it would’ve been Tamir Rice’s 14th birthday had he not been shot and killed by police at age 12.

“I don’t want to hear anymore about how far we’ve come when paid public servants can pool a drive-by on a 12-year-old playing alone in a park in broad daylight, killing him on television, and going home to make a sandwich,” Williams said from the stage.

While he received a standing ovation for his speech, not everyone was a fan. There’s now a Change.org petition addressed to ABC calling for Williams to be fired from Grey’s Anatomy for his “racist rant.” Erin Smith, who launched the petition last week, called it a “hate speech against law enforcement and white people” and points out that if the reverse happened, the white person making that speech would be fired.

If this was a white person making the same speech about an African-American, they would have been fired and globally chastised, as they should be, but there has been no consequences to Williams’ actions. There’s been no companies making a stand against his racist remarks and no swift action condemning his negative attitude. Why was Burke’s character fired from Grey’s Anatomy after his inappropriate homophobic slur, but nothing for Jesse Williams? Why the one-way street? Why the support for a hater? Why the hypocrisy?

Smith uses the hashtags #EqualConsequences4RacistBehavior and #AllLivesMatter in her campaign, the latter of which critics say erases the original context of the Black Lives Matter movement.

Smith’s petition has received more than 3,100 signatures to date, but has been mostly ridiculed online.

“It’s also important to remind the people against this petition that this is not about politics,” Smith wrote in an update. “False assumptions about my ethnicity or who I support politically is counter productive. This petition is about equal consequences for racist behavior.”

Williams, for his part, doesn’t seem too worried about the petition and the hype its generating.

Do not promote empty people & their tantrums. Pure clickbait to gain followers, attention & money, for themselves, not you. Never you.

Shonda Rhimes, the showrunner of Grey’s Anatomy and Scandal and a producer of How to Get Away With Murder and The Catch (all which air on ABC), publicly praised Williams for his speech last week.

And has since responded to talk of the petition with a simple puhlease.

Another Change.org petition, launched two days ago, calls for Rhimes not to fire Williams for his BET Awards speech. It already has more than 18,000 signatures.