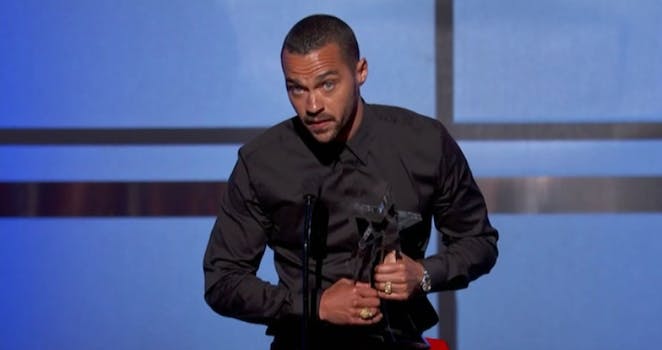 In the most memorable moment of last night’s BET Awards, actor Jesse Williams delivered a speech highlighting systematic oppression toward the black community. Then Justin Timberlake put his foot in his mouth.

The 34-year-old Grey’s Anatomy star accepted BET’s humanitarian award for bringing issues like police brutality, appropriation, and the value of the black woman to the forefront.

“A system built to divide and impoverish us and destroy us cannot stand if we do,” Williams told the crowd.

The biracial activist who also concentrated in African-American studies at Temple University said black people need to know where they come from to move forward. He also gave a special nod to black women.

“This is for the black woman, in particular who have spent their lifetimes dedicated to nurturing everyone before themselves. We can and will do better for you,” he said.

On the topic of police brutality, Williams said there is a difference in law enforcement’s treatment toward people of color.

“We’ve been looking at the data and we know that police somehow manage to de-escalate, disarm, and not kill white people every day. So what’s going to happen is we are going to have equal rights and justice in our own country or we will restructure their function in ours,” he said.

Onlookers stood to their feet in applause as Williams paid homage to Tamir Rice, who would have turned 14 this weekend. Rice was shot and killed by a Cleveland police officer in 2014.

“I don’t want to hear anymore about how far we’ve come when paid public servants can pool a drive-by on a 12-year-old playing alone in a park in broad daylight, killing him on television, and going home to make a sandwich,” Williams said.

Williams urged the gathered celebs to use their money and influence to make an impact on the world around them. The atmosphere went from rap concert to Baptist church in matter of seconds. He went on to say black people are “conditionally free” and still have a ways to go toward legitimate equality.

Twitter erupted in praise for his bold, hair-raising lecture.

Jesse Williams knows very well the privileges that come with his celebrity, green eyes, and light skin and uses it to further a cause.

However, Justin Timberlake is facing scrutiny in light of his response to a tweet about his own appropriation of black culture after he complemented William’s speech.

Justin Timberlake wasn't wrong when he supported Jesse Williams speech but his reply to the other tweet was a bit contradictory.

.@jtimberlake dude @iJesseWilliams was literally only addressing black people. He made direct criticisms to your whole career.

Y'all know damn well the "we" Justin Timberlake was referring was the human race. Yes, his tweet was naive. But at least he had hope.

Others didn’t see anything wrong with his response. Timberlake apologized on Twitter shortly after the backlash.

I feel misunderstood. I responded to a specific tweet that wasn't meant to be a general response. I shouldn't have responded anyway…