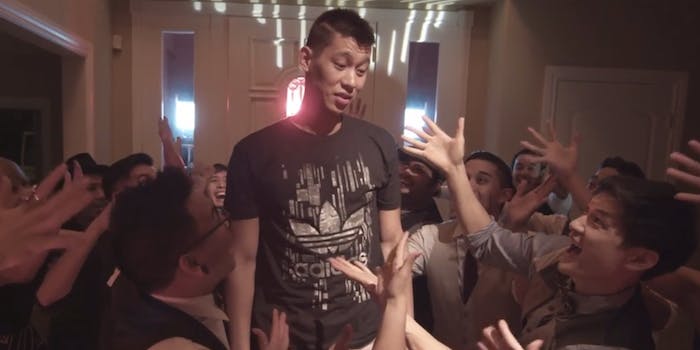 After a few seasons punctuated by injuries and less-than-stellar play, Jeremy Lin and his supporters, are confident they can bring the 2012 Linsanity magic.

Jeremy Lin is back, and he has the YouTube video to prove it.

After a few seasons punctuated by injuries and less-than-stellar play, Lin and his supporters are confident they can bring the 2012 Linsanity magic (and the merch dollars that go with it) back to the NBA and have taken to social media to light the candle on their campaign. Sadly, we are witness to a prime jump-the-shark moment.

A direct rip-off of Jimmy Kimmel’s “Mean Tweets” segment where celebrities read aloud some the nastiest comments made about them on Twitter, Lin’s YouTube video features Lin’s pals—a group of YouTube celebrities and one friend who appeared on Glee—going the dance-routine route (with lots of self-effacing humor) to cheer him up after having been trashed in 140 characters. Does he believe that making fun of himself is the path to renewed celebrity?

Linsanity is one of those fast-burn sports fables that told the tale of a young man, the son of Taiwanese immigrants, who graduated from one of the nation’s most prestigious universities and beat the odds to become (some of) an NBA star. Linsanity led to global media attention (especially in Taiwan) along with huge sales of Jeremy Lin T-shirts and a feature film, Linsanity, which played at major film festivals in 2013 such as Sundance and SXSW. To top it off, Lin is a down-to-earth young man with earnest Christian values: His jersey number 17 (which he wore on the Knicks and will wear again on the Lakers) has many biblical references related to overcoming the enemy and complete victory. Any seasoned publicist would tell you, Linsanity was too good to be true. Those same PR folks would agree it wasn’t meant to last.

What gets lost in this goofball effort is that Jeremy Lin’s story truly is an inspirational one and deserves to be told as a lesson that courage, persistence, and self-confidence are often as important as being able to consistently sink the buzzer-beating three-pointer. Let’s hope real fans can separate man from myth and move and look past this bizarre piece of minor buzz.