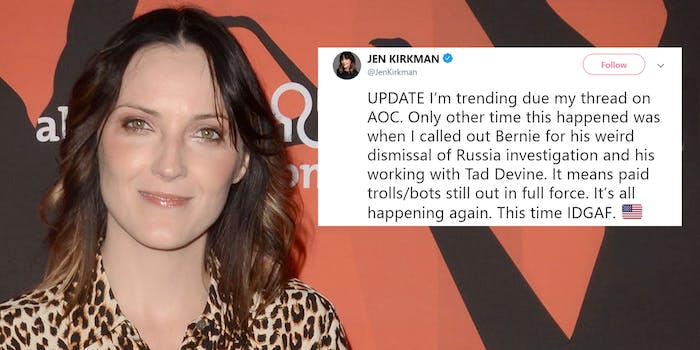 Is Russia using the left's new star as an agent of chaos? This comedian thinks so.

Over the weekend, Ocasio-Cortez (D-N.Y.), who made waves running on an unabashedly left-leaning platform, said she wanted to support more primary challengers to moderate Democrats. In a call with Justice Democrats, a group that supported progressives in 2018, Ocasio-Cortez said she was going to back and recruit more challengers to incumbents, according to the Intercept.

As the 2018 election showed, Democrats who are receiving challenges from the left can move moderate candidates to more left-leaning policies and platforms, instead of watching them scurry to the center to capture swing voters.

But, what if the center is where Democrats should be, and any calls for things like abolishing ICE and Medicare-for-all are secretly exactly what the Russians want?

Over the past day, Kirkman, who has dropped her fair share of theories before, said she believes that Ocasio-Cortez’s progressive platform is being used by Russian trolls to help divide the Democratic party. And that speaking out about progressive causes, while downplaying Russian election interference, is proof something is afoot.

She also implied that there is “something more going on.”

Kirkman believes Ocasio-Cortez should support centrist Democrats as 2020 approaches. She also spoke about how she once supported progressivism, but then gave up on her ideals.

So… Should no one take a stance on anything lest Russian actors tweet about it? Should no one believe anything in case they may change their mind? Kirkman has yet to clarify.

But one thing is for certain, the internet loves when someone spins a conspiracy theory out of nothing and keeps tweeting through it.

folks, i regret to inform you that jen kirkman is at it again pic.twitter.com/KN3vSBebsq

Jen Kirkman is a female Alex Jones for centrists.

User Nathaniel Wicks summarized Kirkman’s worldview as “I was poor and wanted change, but now I have money and I think things are fine.”

Ocasio-Cortez takes progressive positions because she supports them, and it’s unlikely that has anything to do with Russia.