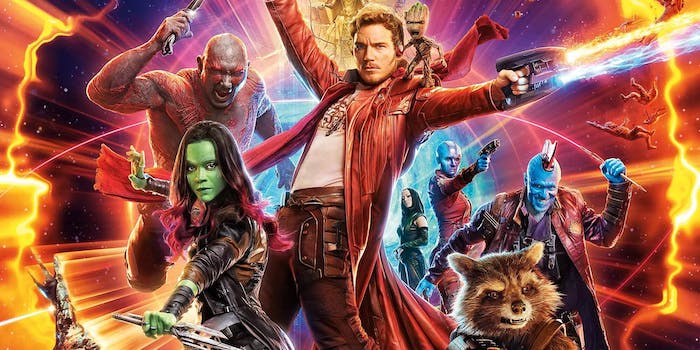 Guardians of the Galaxy Vol. 2/Marvel

It includes a ton of unheard songs that might be in 'Vol. 3.'

Music was crucial to Guardians of the Galaxy‘s success, so the soundtrack listing is a closely guarded secret for new movies. But considering how long we may have to wait for Vol. 3, director James Gunn just did Marvel fandom a solid by sharing his entire Awesome Mix playlist on Spotify.

The Guardians movies are mostly soundtracked with pop songs from the 1970s and ’80s, collected on a pair of mixtapes created by Peter Quill’s mother Meredith. For many fans, songs like “Hooked on a Feeling” are now synonymous with the franchise.

Twelve songs appear in the first mixtape and 14 songs appear on the second, whereas Gunn’s master list is a full 64 songs long. You can listen here on Spotify, including artists like Hall & Oates, Barry White, and Queen.

“I’m not promising I won’t use these in future films,” tweeted Gunn. “But we could all use some joyousness during our time in quarantine.”

Guardians of the Galaxy Vol. 3 doesn’t have an official release date yet, but it was expected to start filming this year, after Gunn finished working on DC’s The Suicide Squad. However, the coronavirus pandemic caused some major upsets in the MCU’s release calendar, delaying new releases for several months and preventing later movies from going into production. The next Marvel release is still Black Widow, delayed from May to November 2020.