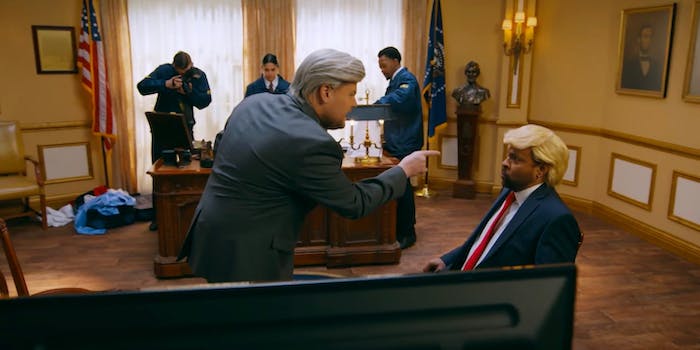 Robert Mueller’s Russia investigation is showing no signs of stopping—despite what House Republicans have said—but James Corden and Shaggy are already giving it the ending that many are hoping for.

Mueller catching Donald Trump red-handed? Check. Leading him out of the White House in handcuffs? Check. Giving Shaggy’s 2000 smash single “It Wasn’t Me” a 2018 political makeover in which Trump unconvincingly tells Mueller that he had nothing to do with Russia? Not so much, but as Corden and Shaggy demonstrate, the song works a lot better than you’d think.

It’s got everything: stacks of evidence and attempts to destroy more, a much sought-for tape, dance sequences, and assurances that Trump’s children will soon join him—even the daughter he sometimes forgets about. And if any of this plays out in real life, expect this to make a comeback much like the song it parodies.