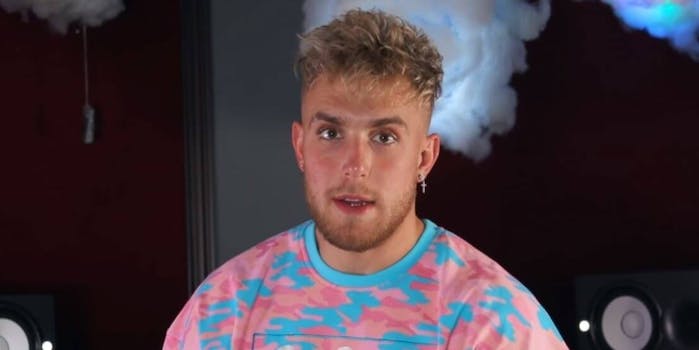 Jake Paul doesn’t just want to give you financial independence by getting you to pay him $20 per month. He also apparently thinks he can cure your anxiety—and he thinks anxiety is your fault in the first place.

Unsurprisingly, the notion has upset people who say Paul’s haphazard approach to other people’s mental health is at best, a joke and at worst, damaging to others.

On Monday, Paul wrote in a tweet that has since been deleted:

Remember anxiety is created by you

Sometimes you gotta let life play out and remind yourself to be happy & that the answers will come.”

Chill your mind out

Go for a walk

Talk to a friend.

Then came the ridicule.

YouTuber Taylor Nicole Dean pushed back with sarcasm. She wrote, “do u have mental illness? just chill out ur mind, it’ll go away :) have arthritis? Just walk it off! it’s created by you <3 bronchitis? it’s all in ur head, just breathe <3 do u have bad vision? no need for glasses! just relax and you’ll see <3”

She continued, “If ur sad, just remember I’m happy so u should be happy.”

She finished by writing, “all of us are gettin cured of our anxiety disorders from jake paul’s tweet tonight… honestly a revolutionary moment.”

Others weighed in with criticism, as well.

But Paul, who was once accused of being a sociopath and is the star of a YouTube documentary series about that very idea, had the last word on Monday.

Despite deleting his original tweet, Paul took credit for starting a conversation about mental health and linked to a healthline.com article about 11 ways to deal with your anxiety and knowing when to see a doctor about it.

Paul wrote, “everyone clowning my tweet but it’s now spreading more awareness about anxiety which i didn’t even know was a thing till I was 18 but had it my whole life & never knew how to deal with it. if u think u have it or wanna deal with it try reading this.”