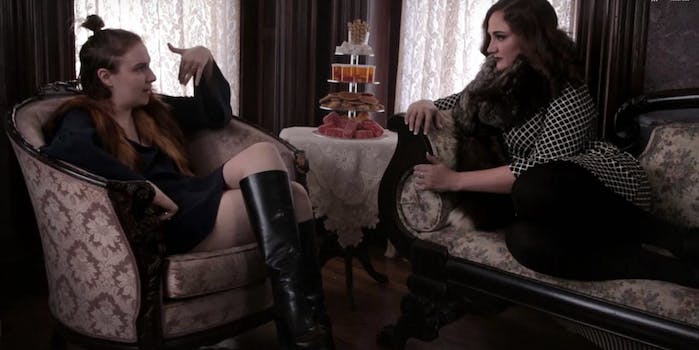 Throw on a silk robe and let's talk this out.

“I like the idea of fetishizing [it], and making [it] glamorous, all that,” says Lena Dunham in the premiere episode of How to Weep in Public.

The two are having a candid conversation about mental health. While they are sure to note that the realities of mental health struggles may involve a lot less glamour and more sweatpants than the velvety, floral wall-papered world of Novak’s webseries, they take comfort in the indulgence of this fantasy. Why can’t a nervous breakdown happen on a chaise longue? Why can’t we put a little rouge on it?

The series was initially imagined as little more than promotional videos for the release of Novak’s recent memoir by the same title. But when Novak teamed with Refinery29 and tapped the vision of series director, friend, and fellow comedian John Early, it blossomed into much more.

“Having frank conversations about mental illness is sort of the opposite of fashion,” Novak tells the Daily Dot. “[But] something John picked up from the book [was] there are times where you might as well kind of romanticize [depression] because you’re in it so [we thought] we might as well dress it up a little bit.”

She adds: “We decided to go super stylized as a nod to Refinery29 but we’re also playing with the glamorous, ultimately misleading vision of suffering—martinis and good hair and all of that.”

While the setting and costumes are carefully curated, the conversations are not. “John had a very specific vision. He thinks I’m a great conversationalist and he loves our long conversations,” Novak says.

“If I were being held to a traditional interview standard, you wouldn’t get the best out of me,” she adds. “It’s just sort of like the way that I’m built where like I can only twirl—the way to get power out of me is through twirling. If you try to make a twirler take steps forward it doesn’t work.”

The resulting webseries offers dazzlingly personal portraits of mental health that are both stunningly honest and tender.

When Dunham and Novak delve into the practical tools they use to wake up and fall asleep—a makeshift steam room and deeply narcissistic fantasies—it feels as though we are entering chambers of their inner life that should require the highest level of security clearance. But the conversation is neither shameful or taboo. It is full of warmth and relief.

In an episode featuring comedian and Broad City writer, Naomi Ekperigin, Ekperigin chuckles in a satin robe as she muses about her own capacity to “keep a child alive.” We feel like we’re there, too, laughing at the challenges of personhood.

“I think hearing it from really specific, interesting people [is important]. Someone can read about [mental health] in a really clinical way and hear the symptoms from a doctor, but if you hear Naomi [Ekperigin] feeling like a waste of resources that brings it into real life in a way that I think is more comforting,” Novak says.

Novak’s hope is that the conversations are both inviting and illuminating.

“You’re also enjoying these people and delighting in them and you’re thinking she’s so funny or listening to Hamm and being dazzled,” she says. “It’s comforting to think that these people that I like struggle with these things. It’s almost like if I struggle with theses things, maybe it could be possible to like myself, too. It’s sort of a positive model revealing that all these people are clearly more than any disorder they’re suffering.”

Strung together the episodes take on a unique shine, each one an attractive and unique jewel in a dramatic statement necklace.

The conversations are also largely buoyed by Novak’s own supportive presence. In each episode, Novak appears elegantly dressed, with impeccable hair and makeup.  She is both poised and vulnerable and meets each offering with a nod or a declarative, “Yes!”

Novak’s on-screen presence embodies much of what she preaches in her book.

“The original idea is that unlike self-help books there’s no expectation within the book for you to do or try anything,” she says.

Novak never urges her guests to find a better way, to think more highly of themselves, or to offer advice of any kind. Rather, she sits with them, fully present, and delights in their stories—reveling in the very compelling humans they happen to be.

When Novak sits down with her father, the conversation is one of the most touching in the series. They address the pressure parents put on their children to be happy.

“You hear this, ‘I just want my kid to be happy,’ and that’s one of the lamest things anybody could say,” explains Novak’s father. “It’s such a limiting concept. … You can’t have pure happiness without pure sadness. You want them to go beyond that.”

If Novak’s memoir is a companion for visiting with the depths of your despair, the series is a beautiful glimmer of hope for when you’re ready to revisit the world.

Novak says that her own lows inspired her memoir: “When I was living at my parents house and I was really depressed I had shut myself off from the social internet. It was too stressful to look at people sort of flying ahead in their lives. But I was looking at these kind of healing websites and then I was reading a lot of books and books were so comforting in a way because there were like no pop-ups.”

While the memoir was born of a period of isolation, the webseries is a shining triumph of collaboration. Paired together, both the memoir and the webseries are tender reminders that wherever your mental spinning might take you, you never have to go it alone.