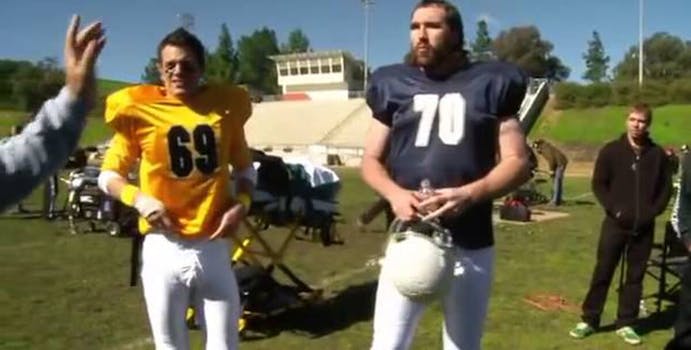 The pranksters are returning to the big screen in 2021.

Seven years have gone by since the Jackass crew last brought its hilariously crude antics to the big screen. If you’ve been sorely missing the opportunity to see a familiar face get hit in the nuts on the big screen, the wait is finally over.

Deadline reports that Johnny Knoxville and company will be reuniting to produce the first Jackass movie since 2013’s Jackass Presents: Bad Grandpa. Right now, all we know is that Paramount has set the film for release on March 5, 2021.

Speculation has already begun regarding which members of the creative team will return for the new film. It’s difficult to imagine a Jackass film without Johnny Knoxville. But, whether co-creator and director Jeff Tremaine will return is unclear. Tremaine and Knoxville created Jackass with film director Spike Jonze.

It is also unknown whether cast favorites like Stephen “Steve-O” Glover, Jason “Wee Man” Acuna, and Brandon “Bam” Margera will make an appearance in the new sequel.

The stunt-prank reality series Jackass launched in 2000 on MTV. Though the antics of the Jackass team were criticized for encouraging dangerous behavior, many millenials remember Jackass fondly. Rolling Stone ranked the first Jackass film, Jackass: The Movie, as one of the “50 Greatest Comedies of the 21st Century.”