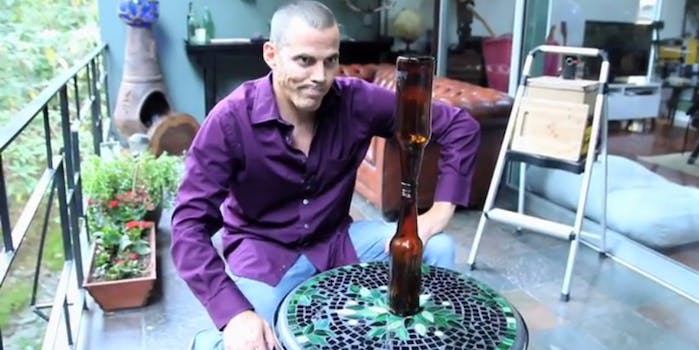 Steve-O is making a jackass of himself again, this time on YouTube

The Jackass star is moving his brand of gross-out humor to YouTube.

Commenters and people who smash gallons of milk in supermarkets are no longer the only jackasses on YouTube.

Steve-O, who starred in the MTV stunt program Jackass and its three spin-off movies, has just created his own YouTube channel. And, hardly a surprise, it doesn’t look like the 39-year-old has lost his penchant for doing the things that made him moderately famous: hurting himself, or finding creative ways to fire your gag reflex.

The other, “Steve-O vs. Beer Bottle,” is a stunt video featuring fellow Jackass alum Chris Pontius smashing an actual root beer bottle over the back of Steve-O’s head.

The videos have a combined total of almost 500,000 views. Noticeably absent from both? The famous Jackass disclaimer, which warned viewers they that they should never attempt to replicate the stunt.

With the Jackass series long concluded—the last appearance of the crew was in 2010’s Jackass 3D, released less than a year before the death of cast member Ryan Dunn—the Jacakss crew have taken to YouTube to their gross-out, um, magic. Bam Margera joined the site in 2012 and has uploaded everything from stunts to footage of his favorite bands. Jason “Wee Man” Acuna also has his own channel, but hasn’t posted any new videos in over a year.

It’s surely comforting to know that the world might have a chance to finally see follow-ups to “Tropical Pole Vaulting” and “The Butt-Chug.”