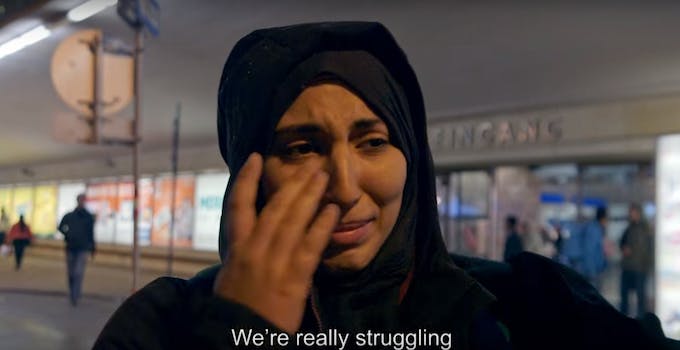 ‘It Will Be Chaos’ tracks the trails of asylum seekers

The HBO doc shows the hopes, dreams, grief, and disappointment of immigrants.

HBO documentary It Will Be Chaos lives through desperate asylum seekers, offering glimpses into the human outcomes of the refugee crisis across the Mediterranean. It’s a timely, compelling, and intimate film.

Helmed by husband-and-wife duo Filippo Piscopo and Lorena Luciano, the documentary zeroes in on two particular stories of refugees who made the precarious passage, including the sojourn of a former Eritrean soldier named Aregai and the sprawling tale of Wael and Doha, a Syrian couple with four children. While the film details the near moment-to-moment uncertainty that plagues all who brave the unpredictable journey toward safety and freedom, it also considers the other side, like Italian locals coping with the influx of immigrants.

Using Lampedusa, Italy, as a starting station, Piscopo and Luciano intersperse the varied thoughts (and actions with Italy’s overwhelmed immigration system) of freedom workers, passive enablers, and those who believe the refugees are a broad danger to Europe. This is where we pick up the lives of the subjects, though Lampedusa also serves as an endpoint for families picking up remains of their deceased.

Some are found using fishing nets. In a disconcerting scene, cranes lift coffins of mostly East African would-be immigrants as an Italian local tells their grieving families about politics, compounding the pain.

However, there are friendlies in the film, including (now former) Mayor Giusi Nicolini, winner of the UNESCO Peace Prize last year. She corrects a group of reporters: “Let’s make it clear,” she declares, ensuring the asylum seekers exist properly termed as a matter of moral specificity. “Those who land in Lampedusa aren’t illegals. They are refugees.”

Not unlike the climate here in the United States under the Trump presidency, the signature scene hits close to home, showing fearful asylum seekers who’ve overcome seemingly everything to reach the border—only to be separated from their young children, for whom they’ve pledged their lives.

The parents, via an interpreter, also speak words said by Mexican and Central American parents roughly 6,000 miles away: How could this happen? Please find our kids! Oh, my God. How?

Released in time for World Refugee Day, the simultaneous beauty and tragedy of It Will Be Chaos immerses the viewer in the hopes and dreams (and rounded grief and disappointment) of immigrants. It finishes with just enough hope to see the faint light at the end of the bent straw.