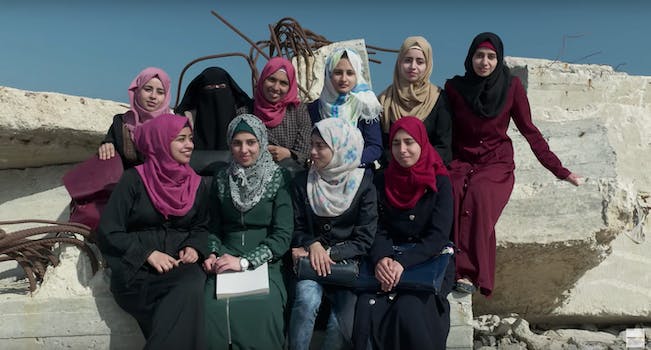 A sweeping documentary for empathetic people.

The global refugee crisis has reached a tipping point. Over 65 million people have been displaced, the highest amount since World War II. It is with the urgency of this reality that Chinese artist Ai Weiwei decided to tackle this issue in his 2017 film Human Flow, now streaming on Amazon Prime.

Human Flow is impressively comprehensive, yet in trying to cover so much Weiwei’s efforts inevitably feel like they fall short. The film jumps around from country to country, focusing on segments of displaced people all over the world.

In 1989, after the fall of the Berlin wall, 11 countries around the world had border walls. By 2016, 60 countries had erected structures to keep people out. In 2015, many European countries began closing their borders to immigrants and refugees, leaving tens of thousands stranded in Greece. Macedonian, Slovenian, Croatian, and Serbian borders have all been closed, leaving no way for refugees to get to Germany, which has been the most welcoming European country. Complicating the situation for the rest of the continent, in March 2016, the EU and Turkey struck an agreement to stop the refugee flow, agreeing that the European Union could return refugees to Turkey in exchange for $6 billion in aid and visa-free travel to Europe.

During the filming of the movie in 2015 and 2016 alone, 22 million people were forced to leave their homes. Every day, 34,000 people around the world are displaced. The average stay of a refugee in any given country is around 26 years. Weiwei travels across Europe, the Middle East, Africa, and America to tell some of their stories.

Weiwei goes out of his way to include these statistics in the movie, although they occasionally distract from the story he’s trying to tell, about people and places, and human truths too complicated to be quantified by numbers. As many facts as you can learn watching Human Flow, what sticks with you about the documentary are the moments of tragedy and triumph both big and small which Weiwei captures.

A woman in Idomeni, Greece, finds her cat, proudly showing pictures of it on her phone, commenting a shot of her big brother too, who’s still stuck in Syria.

In Turkey, a man cries over a makeshift gravesite for people who died at sea, buried in the dirt and marked simply. Destroyed apartments with pictures of wedding dresses highlight the war-torn region where a Kurdish father talks about a house he built for his children. A young man tells his brother that he doesn’t want to see him cry, and will follow him whether he goes back to Turkey or on to Germany. One woman in the same Turkish camp talks about roaming with her son for 60 days, trying to apply for asylum.

A group of girls who graduated school together gathers one last time, in an attempt to escape and find some respite from the “big prison of Gaza,” as one of them puts it. Also in Gaza, a tiger gets shipped off to a new home in Johannesburg, as people in the camp cheer its departure, happy that it can leave even if they can’t.

In Germany, where refugees live in cubicles contained in a massive hanger, a young girl says, “In this camp, everything is forbidden… I get so bored.”

A graphic shot of a boy’s dead body, buried in the sand in Iraq, is followed by a shot of a cow walking down the street in Mosul.

These human moments hammer home the story. Weiwei shows the struggle refugees face on their voyages. In 2016, more than 5,000 drowned trying to cross the Mediterranean. One woman weighed less than 80 pounds when they found her. In another segment, Weiwei records a group of pregnant women on boats from Somalia, who would’ve lost their babies had workers not gotten to them in time.

And that’s just what happens during travel. Daily life in the camps is another struggle altogether. In one camp Weiwei visits, 100,000 people live in the space of less than a mile. And even for those who aren’t contained, life is not easy. In Lebanon, half of the Syrian refugee children don’t attend school. This lack of education is what leaves many, especially young men, open to radicalization, one human rights expert surmises.

There’s much to be disheartened about, though Weiwei finds hope in showing the perspective of those who are fighting this crisis. “The more immune you are to people’s suffering, I think that’s very, very dangerous,” Dana Firas, the princess of Jordan says. A German aid worker echoes the same sentiment later in the film, noting, “The hardest [thing] is to actually make them feel like they are a human being.” The way the film equates “refugee” with “human” and “humanity” is its biggest strength.

But these talking heads do feel in conflict with Weiwei’s broader approach. Human Flow works better when it is just straightforward footage, with occasional text thrown in. Weiwei himself also takes an active part in the documentary, with mixed results. One shot features him getting a haircut alongside the refugees. He later shaves a Mexican man’s head. He goes out of his way to comfort the woman who tells him about wandering with her son.

Weiwei was displaced as a child himself when his parents were forced to leave their home during the cultural revolution, so it makes sense that he feels a personal connection to this topic. But the way he intervenes is like he’s breaking the fourth wall, reminding you he’s making a documentary, just as you start to get wrapped up in what you’re watching.

In one great shot, he pans across the faces of refugees in Germany, only to cut to another camera, recording the first one as it pans. The way he shoots certain footage is beautiful and emotionally manipulative at the same time, like how he tracks a boy missing an arm as he walks down the street, not acknowledging his injury but letting the camera linger on it anyway.

The best images in Human Flow are the overhead shots of the camps, showing so much life in such contained spaces. The powerful shot Weiwei ends on is one of countless life vests stacked on each other, a symbol of the crisis’ vastness.

Mohamed Fares, a Syrian astronaut Weiwei interviewed, suggests that if we could just get all the “bad people” in the world up into space, we’d be a lot better down here. It’s a nice idea, though Human Flow makes it clear the refugee crisis is a lot more complicated than just putting people into categories of “good” and “bad.” WeiwWei and others in the film suggest it is a battle for the soul of Europe, if not the entire world. It’s hard to imagine any empathetic person watching the film not feeling the same way.