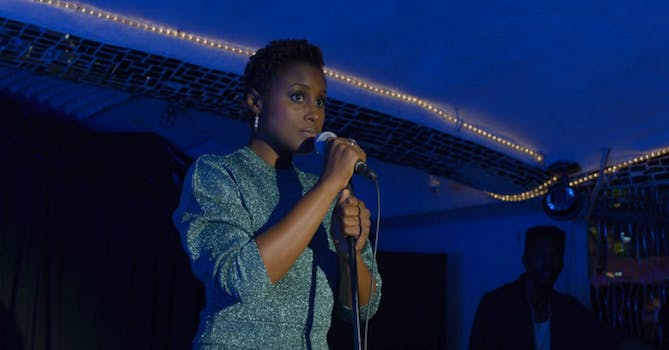 Looking in the mirror with Issa Rae’s ‘Insecure’

“How different would my life be if I actually went after what I wanted?” is just one of the big questions asked in Insecure, the new HBO series from Issa Rae.

It might seem like a timeworn question in the era of female-led comedies about women and their work (and relationships), but Insecure offers a key take on that balance. In the first episode, which opens with Kendrick Lamar’s “Alright,” protagonist Issa (played by Rae) is asked other unfiltered questions by some young students, including why she talks like a “white girl.”

Issa lives in South Los Angeles and works for a nonprofit. She’s in a lackluster relationship with her job-adverse boyfriend, Lawrence (Jay Ellis). We’re introduced to her best friend, Molly (Yvonne Orji), and see their parallel professional lives unwind as both face obstacles at work—like being the one black person there. Insecure goes deeper than just showing what it’s like to be a woman in a man’s world; Issa and Molly work with people who are tripping over themselves to not offend.

As Rae told the Daily Dot over the summer: “POC [people of color] are always having to think about how they are being perceived, making people feel comfortable while navigating their own insecurities. That’s something I find interesting and compelling, and that’s something that non-people of color can’t relate to.”

Rae started straddling these two worlds in her webseries, The Misadventures of Awkward Black Girl, and many of the same themes can be found in Insecure, like Rae’s habit of rapping in the mirror as a form of affirmation. This leads to the first episode’s best moment: When Issa tries to impress an old friend by freestyling at an open mic. That song becomes “Broken Pussy,” which comes back to haunt her a few episodes later. While some critics might worry the show perpetuates stereotypes about single black women, the song might also speak to any woman who thinks there’s something “wrong” with them if they haven’t checked off certain boxes by a certain age.

Rae has two strong pillars here. One is co-creator and writer Larry Wilmore, formerly of Comedy Central’s The Nightly Show. Though Wilmore didn’t get much time with his show, Insecure definitely reflects his sense of humor. Issa often schools white people on black history— sometimes in her head, sometimes out loud—as in episode 3, “Racist As Fuck.” When a nonprofit co-worker asks why the black kids aren’t swimming on a beach trip, she hits back: “slavery.”

Director and Executive Producer Melina Matsoukas is the other linchpin: At times Insecure has a music-video feel, complete with slow-motion shots and impeccable lighting. Solange Knowles, who worked with Matsoukas on the video “Losing You,” is the show’s music consultant, and the soundtrack floats on deep cuts from Thundercat and Junglepussy, set against the impossibly blue sky of southern California.

While Insecure is a show about identity and where you’re from—South Los Angeles, Atlanta, and Luke Cage’s Harlem don’t feel that far apart—it’s also about relationships. As with other comedies about white female friendship, we get a sense of the dialogue that develops between two friends; but with Molly and Issa, we get a whole different view. There’s talk of a guy being Issa’s “Achilles dick,” but also a deeper exploration of how black men with college degrees view women and the idea of the “bitter” black woman.

Insecurity is just one facet of the show; at its heart, Insecure is about a black woman looking inward. It doesn’t have all the answers, and neither do its characters, but it asks a lot of the right questions.