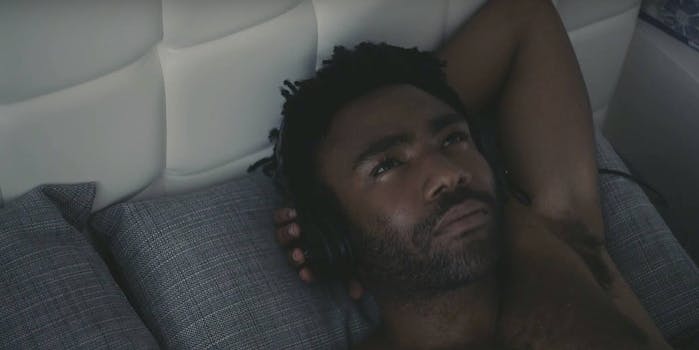 You'll want to keep an eye on this show.

Glover, who created and co-wrote the series, stars as Earn Marks, a young father who’s trying to make some money and offers to manage his cousin, Paper Boi (Brian Tyree Henry), a rapper on the rise. The episode starts with an altercation in a parking lot, or some “deja vu,” as Paper Boi’s friend Darius (Lakeith Stanfield) puts it. A voice calls out from the night: “Worldstar!”

(Darius has some of the best lines of the episode, including a sick Flo Rida burn: “I don’t know, man. I like Flo Rida. Moms need to enjoy rap too.”)

Whereas Netflix‘s The Get Down revised New York City’s hip-hop history through the lens of a musical, Atlanta explores a different side of history. As Glover told Vulture, they worked hard to make sure the look and feel of Atlanta was right, from apartments to drawls. He wanted to try to bottle the personal feel of Chappelle’s Show: “So just let me try and make this show as personal as possible, and not just all the nice and fun stuff of being black shown all the time.”

There’s also a great bit with his parents, in which they break down an offending turd he left in their toilet.