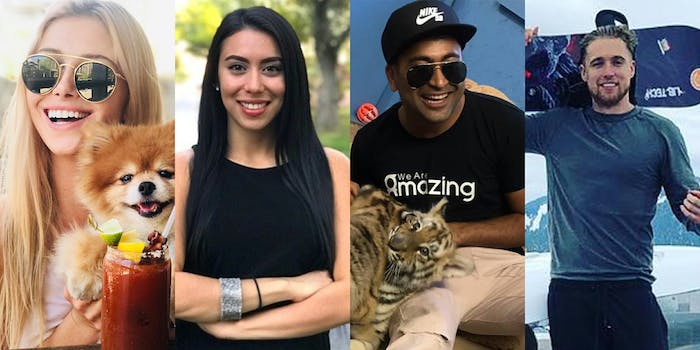 Authorities are still looking into what caused that crash.

A passenger plane traveling from Scottsdale, Arizona, to Las Vegas crashed on Monday night, killing all six people on board. Among the passengers were Instagram stars and event promoters who posted to social media before the fatal crash.

While the identities of the victims have not been formally released, Mariah Coogan, Anand “Happy” Patel, James Pedroza, and Helena Lagos were reportedly on board the plane, according to social media posts. Coogan was an Instagram model and horse trainer from California who boasted more than 28,000 followers. Lagos, Pedroza’s girlfriend, was executive director of the Vegas-based Rebel Venture Fund, which helps startups. Pedroza was a nightlife promoter in Vegas, and Patel was an event promoter from Oklahoma.

It’s believed Pedroza was behind the controls at one point, according to posts from Coogan. In one video Patel can be seen in the seat next to her, but Patel also apparently posted a Snapchat about his “first flying flight experience” with a picture of the plane’s control panel. A post from a Facebook friend shows some of the videos and photos from before takeoff.

In February, Pedroza posted photo and video of the small plane to Instagram. Authorities are now investigating whether the plane was equipped to carry that many people, who was flying, and the identities of all on board.