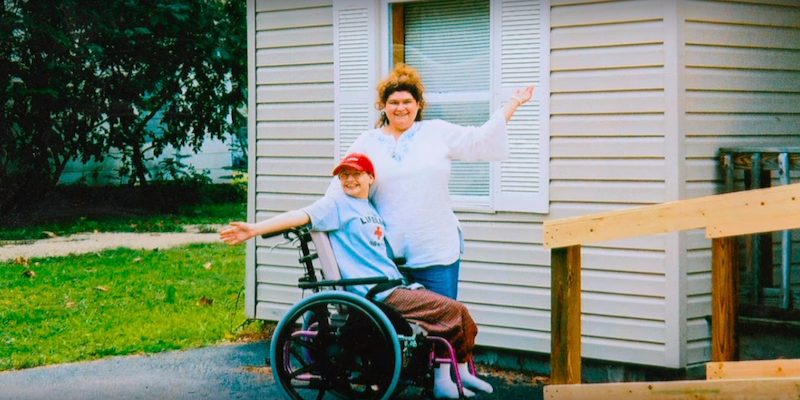 To all outside appearances, Dee Dee and Gypsy Rose Blacharde were an inspiring family, a mother and daughter who took care of each other and always found the bright side in spite of Gypsy’s long list of medical problems. Gypsy had suffered through leukemia as a child, and was now confined to a wheelchair due to muscular dystrophy. She ate through a feeding tube. Dee Dee told people that her teenage daughter had the mind of a 7-year-old. Still, they were always smiling—the sort of family a community instinctively surrounds and wants to take care of.

Then in June 2015, Dee Dee was stabbed to death inside the pink Habitat for Humanity house where she lived with Gypsy. A Facebook post on Gypsy’s page declared, “That Bitch is dead!” Soon after, Gypsy and her boyfriend, Nicholas Godejohn, were arrested for Dee Dee’s murder, and before anyone could get over the shock of that, there was an even bigger jaw-dropper—Gypsy could walk just fine. It was the first lie of many, and the first secret in a chain of unspeakable horrors that would be revealed as the investigation continued.

Dee Dee’s shocking murder is how HBO’s new crime documentary, Mommy Dead and Dearest, opens, but from there it’s like a Russian nesting doll of tragedy. The murder itself is perfect tabloid fodder on the face of it, but by the time Gypsy stands on her own two legs in a police interrogation room, director Erin Lee Carr will have you firmly on her hook. Mommy Dead and Dearest is a well-made film, but honestly… it doesn’t even need to be.

The simple facts of the case could be presented as a PowerPoint presentation and it would still be shocking, nearly unbelievable, and profoundly sad. This is the sort of tale for which they invented the phrase “stranger than fiction.”

Through archival videos, news segments, and interviews with friends, family, and people involved in the case, Carr unfolds a series of twists and turns that seem like rejects from a particularly ambitious day in the Law & Order writer’s room. Gypsy was the victim of her mother’s Munchausen by Proxy, with Dee Dee faking or even inciting the long list of ailments that supposedly bedeviled Gypsy from an early age. Together, the mother and daughter had been scamming charities out of money, trips to Disney World, even the home they lived in. The level of control, manipulation, and outright abuse Gypsy was subjected to is almost unthinkable.

But Mommy Dead and Dearest continually challenges the viewer’s empathy and sense of justice. Dee Dee at first appears to be the victim, but then is revealed to be true monster. But even if Gypsy’s tragic life cast her mother’s murder in a sympathetic light, there’s still no question that she and her boyfriend planned and executed it. This was, whatever else it might be, no crime of passion. And then there’s Godejohn himself—at first seemingly a sweet, romantic guy, but with a haunting dark side. Every time you think you’ve figured out the shape of the case, the angle tilts and everything looks different.

Mommy Dead and Dearest is an emotional roller coaster from start to finish. But by the time it is wrapping up, all the horrors that came before have been overtaken by a deep, profound sadness. Most of this is thanks to the time Carr spends with Gypsy’s estranged father, Rod, and interviews with Gypsy herself, now serving a 10-year sentence. It’s in these moments, especially their moments together, that it all becomes so clear just how horrible and heartbreaking and utterly unnecessary every single part of this story is. Gypsy could have been a normal kid, living a normal life, instead of spending her youth trapped in something right out of a Stephen King novel.

Mommy Dead and Dearest will leave you exhausted by the time the credits roll. It’s addictive, white-knuckle viewing, dragging you through the darkness and leaving you with the smallest glimmer of hope. But even that glimmer is tainted, because while the possibility of redemption for Gypsy is welcome, there’s no escaping the underlying truth: None of this had to happen.