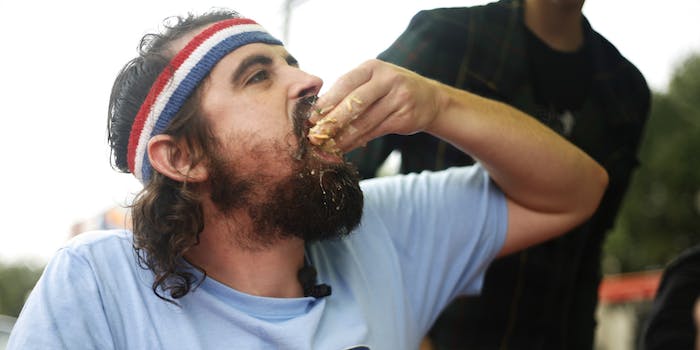 Meet the most patriotic competitive eater in America

If competitive eating were an Olympic sport, Hungry Todd Rungy would be captain of Team USA.

Every sport has them. Away from the superstars, the big-swinging-dick Super Bowl-winning quarterbacks and World Series champion hitters, you have the characters—athletes who may not have the metronomic arms of Greinke or Rodgers or the feet of Peterson, but by sheer force of charisma or perseverance still transcend the scene. In competitive eating there is but one. Meet Hungry Todd Rungy.

Sweatband aside, on initial inspection there’s nothing particularly exceptional about Rungy. His beard is par for the course these days around his home in Austin, Texas. He’s even the first to admit that he’s got a long way to go to beat Joey Chestnut, the world’s No. 1 competitive eater, in a hot-dog-eating contest.

But a closer look reveals a passion for and a desire to succeed in a sport that encapsulates his two loves; food and the United States of America. “I’m pretty much your average American that loves his country and loves to eat food,” says Rungy. “When I put on my headband, it’s like Superman putting on his tights. I just need to sing my theme song or ‘The Star Spangled Banner,’ and it gets me in the eating mindset. You know I’m ready for action!

“Eating and food and America go hand in hand. Think about it … Our first holiday as a startup country was a giant feast with a bunch of Indians, and we still celebrate it today! If I say ‘Fourth of July,’ what are the first two things that come to your mind? Fireworks and cookouts!”

After a few years doing amateur competitions in and around Texas—“mostly just low-key stuff like tacos and frozen bananas”—a chance meeting with University of Texas film student Joshua Riehl set Rungy’s sights on professional eating. “He had been looking for a subject for his thesis film, so I agreed to let him film a couple of competitions. They filmed some big eating victories, like the Tootie’s apple pie contest and also some low moments, like a hot dog contest that I didn’t win. When I finally decided, ‘OK this is something I should get serious about,’ they were around and wanted to keep filming.”

The result is a recently debuted 40-part webseries, which follows Rungy from the aforementioned lowest point of his eating career—which ended with him in an ignominious headlock—toward his goal of competing alongside Chestnut at the Nathan’s Hot Dog Eating Contest on Coney Island.

You can tell that the loss at the hot dog competition is fuel for Rungy; it clearly still stings. “Have you ever been put in a headlock? I had been working hard for a shot at a qualifier to get my way to Coney Island, and I blew it. That hot dog contest was like my own personal Bay of Pigs Invasion, except this was the parts of the pigs no one wants to talk about. It put me in a real funk for a couple of months.”

But Riehl and his crew have offered a path to redemption, reminding him that it was just one loss, even if it was a colossal one. “And you know what? They were right,” says Rungy. “I do have a natural talent for eating, and, after some reflection and being able to see the video from the contest, I realized I was a real jackass and that maybe I lost because of that and not my eating abilities.”

Viewers should probably not expect dramatic developments to Rungy’s character over the course of the series—“this is Texas, so we’re still unresolved on the question of evolution”—but his approach and attitude toward eating gets a serious revamp: “Early in the season, you see me learn that maybe natural talent alone isn’t enough to win the Yellow Mustard Belt, and so you’ll see me get serious about competitive eating.” He continues:

“[To do that, you’re] gonna want to get on a training regiment, strengthen your jaw muscles, practice stretching your stomach by eating bags of cooked rice and then drinking a gallon of water. Finally, you need a game plan. You can’t just come off of the street and eat 64 Chick-fil-A nuggets without a game plan. You have to stretch your stomach first or else you’re going to end up vomiting blood. Which I learned the hard way.

“The most important thing is to commit yourself to it. Do you think Joey Chestnut or Kobayashi got to the top by just doing this on the weekends? Heck no! They’re in it! It’s a lifestyle.”

But it’s a lifestyle that is starting to attract publicity for the wrong reasons. How does Rungy deal with the complaints that competitive eating is an affront to decency in a country that is battling obesity and an international reputation for waste? Like a basket of tongue buns, he tackles the critics head-on. Frankly, he says, eating competitions are what’s good about America, and the critics aren’t.

“Are they complaining about all of the food that Whole Foods throws out from their salad bar at the end of the night? No! They’re just angry that I’m actually out there doing something I love for the country I love and not just sitting around trolling people on the Internet,” Rungy says.

“If I had my way, everyone would have a stomach full of delicious food. That’s part of my slogan, ‘Keep Eating for America!’ … We’ve got so much food that no one in America should go hungry, they should keep eating!”

But therein lies a thorny question. If Hungry Todd Rungy is eating for America, then who does Chestnut, the undisputed champ of this American pastime and potential future foe, eat for?

“I’m not going to sit here and tell you he’s not a patriot, but when‘s the last time you heard him giving this great country of ours a shout-out? Plus, the guy’s from California, which, if you ask me, is pretty much the least American of all the states.

“But I did met Joey Chestnut once and after he gave me some pretty good eating tips [and] he gave a ‘Keep eating for America’ on camera with me, so even if he’s not actively pimping the USA, I’m pretty sure that deep down he’s got a little bit of William Taft in his heart.”