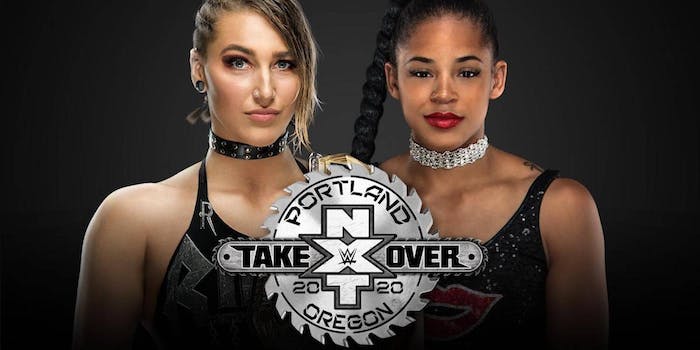 How to watch NXT TakeOver: Portland

NXT TakeOver events usually share the weekend with a major WWE event, but this Sunday NXT gets to enjoy the spotlight all by itself.

NXT TakeOver events usually share the weekend with a major WWE PPV event, but this Sunday, NXT gets to enjoy the spotlight all by itself in a WWE Network exclusive. That’s good news, because any wrestling fan that checks out NXT will realize that’s it’s some of the best wrestling out there right now–sometimes even better than what WWE’s got on its main stage.

My personal favorite wrestler to watch from the NXT roster is Rhea Ripley, who is just a complete badass in every way. She’ll defend her championship against Bianca Belair on Sunday night, and I think she’ll keep it–because it’s crucial to get her to WrestleMania and into the ring with Charlotte Flair.

We’ll also see one of my other faves, Finn Balor, go up against Johnny Gargano for the first time; NXT Champion Adam Cole defend his title vs. Tommaso Ciampa, and Undisputed Era will do the same against the BroserWeights. Oh and last but far from least, Dakota Kai will take her former teammate and friend Tegan Nox in just the kind of street fight you would expect after their relationship went sour.

Here’s everything you need to know to watch NXT TakeOver: Portland.

WWE Network is the best way to get the NXT TakeOver: Portland live stream if you want to watch these wrestlers go nuts in the ring. If you’re not already a convert, the news is good: You can get a month of the service free right now, which means you can watch NXT TakeOver: Portland without paying a dime. After that, the service costs just $9.99 per month, but you can cancel anytime.

Considering WWE Network lets you stream all 14 yearly pay-per-view events at no additional cost, that’s an incredible deal. Seriously, just think about how many times you’ve paid $60 to watch one PPV. For that same amount, you’ll get a whole year of WWE Network—and access to all past events. Between NXT, RAW, and Smackdown Live you’ll be able to watch all your faves hit the mat on a weekly basis, and you’ll also get access to documentaries, reality programming like My Son/Daughter Is a WWE Superstar, and originals like Wrestlemania Rewind.

If you have cable, you can order NXT TakeOver: Portland from Spectrum, Cox, Xfinity, Verizon FiOS TV, Cable One, Dish Network and DirecTV for $59.99-$69.99. But given all of the benefits that come with WWE Network—not to mention the chance to get started with one free month—we’d highly recommend figuring out a way to stream it using one of the devices listed above.