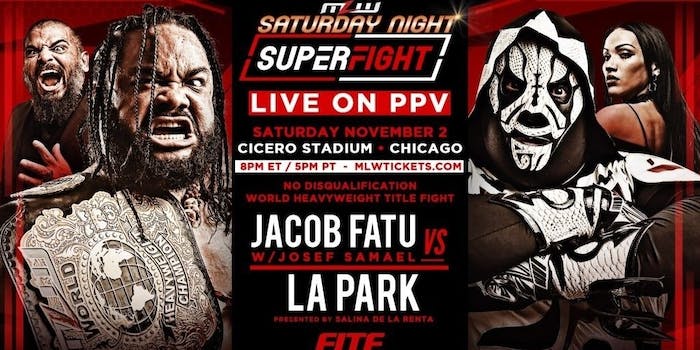 It's a packed card with four different titles on the line.

Jacob Fatu comes from a long, glorious family line of Samoan wrestling superstars. His uncle is WWE Hall of Famer Rikishi. His father was the Tonga Kid who appeared in The Islanders tag team in the mid-1980s and then became part of the Samoan SWAT Team in WCW. Current WWE star tag team The Usos are his cousins.

However, Fatu is building his own name in pro wrestling. He has another opportunity to step into the spotlight on the MLW Saturday Night Superfight PPV, which Fite TV will live stream, when he defends his world heavyweight title vs. LA Park.

Fatu joined the MLW promotion earlier this year, and in July, he beat Tom Lawlor to take his belt. Now, he faces a challenge from LA Park, who has his own long history in wrestling. Formerly known as La Parka in WCW, the luchador, who’s in his early 50s and spends some time wrestling for Mexico-based promotion AAA, won the 40-man Battle Riot to earn his shot at the strap.

The Fatu-LA Park matchup is one of four titles on the line during Saturday’s event. Teddy Hart, who’s been the world middleweight champion for nearly a year, will defend his belt vs. Austin Aries. The tag team titles currently held by MJF and Richard Holliday will be on the line vs. Marshall and Ross Von Erich, and Alex Hammerstone—the national openweight champ—will face off vs. Davey Boy Smith Jr.

Considering this is the first attempt at a PPV for MLW, the promotion has done its best to put on what should be a packed card filled with action and recognizable names at a relatively low price point.

“This is a chance for MLW to make a statement,” MLW creator Court Bauer told Sports Illustrated in July. “We want to give value to our fans.”

Here’s everything you need to know to watch the MLW Saturday Night SuperFight live stream.

The best way to watch these MLW wrestlers compete on Saturday Night SuperFight is through Fite TV.

Since it’s a PPV, there’s no legal way to get around the $19.95 fee to watch the card. But Fite TV (you can sign up here) has you covered. Fite TV is available on services like Roku, Apple TV, Amazon Fire Stick, PlayStation 4, Xbox One, Android and iOS devices, desktop and laptop computers, and smart TVs.

Fite TV streams plenty of other wrestling and MMA cards from around the globe, including Bare Knuckle Fighting Championship and Ring of Honor. If you don’t want to stream it, the PPV is also available on all major cable and dish systems.

Pre-show Card | 7pm on Fite TV (and various other services)