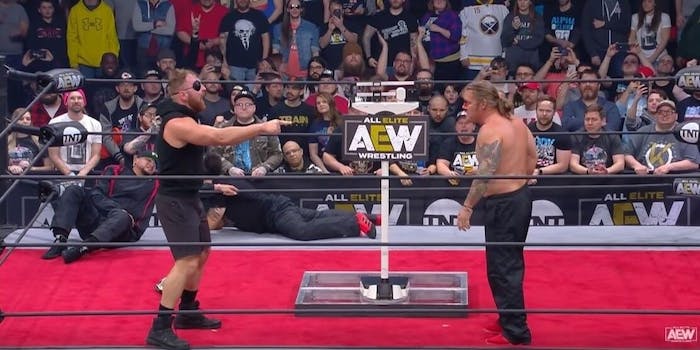 How to stream AEW Revolution

Will Chris Jericho survive the onslaught of Jon Moxley?

For the past few months, AEW has put on amazing wrestling performances and some interesting storylines during its weekly Dynamite TV show. On Saturday night, the young wrestling promotion will merge the two for the AEW Revolution PPV in an event you can stream on B/R Live. The action should be thrilling.

Chris Jericho, the only world titlist the company has ever known, will put his belt on the line vs. Jon Moxley, a former WWE star who’s brought his intense performances to the promotion since his high-profile signing last May.

Cody Rhodes, one of the founders of AEW who was once known as Stardust in the WWE, will take on MJF in what could be the end of a great program between the two that featured MJF giving Rhodes 10 whip lashes and Rhodes performing an amazing off-the-top-of-the-steel-cage moonsault on MJF ally Wardlow.

Also, it wouldn’t be a shock to see the tag team of Kenny Omega and Adam Page fall apart as they defend their titles vs. the Young Bucks. Lately, the promotion has been teasing a break up between Omega, who is also allied with the Young Bucks, and Page—who, in storyline, has been excessively drinking alcohol before and after matches. Also, Orange Cassidy and Jake Hager will make their AEW wrestling debuts in separate matches.

There’s certainly plenty riding on the PPV for the promotion.

“A lot of people ask us, ‘What’s your WrestleMania? What’s your big event?’ We’ve never designated one event as the big event out of our four PPVs,” Rhodes told Newsweek. “But just kind of going with what my gut is feeling and seeing the marketing element, the thematic element, the staging element, I think Revolution may end up being the big one.”

Here’s everything you need to know to watch AEW Revolution.

AEW Revolution: How to watch online

The only legal way to watch the AEW Revolution PPV in the U.S. is through B/R Live, Bleacher Report’s live streaming service, showing everything from international soccer tournaments to national lacrosse events. It also broadcasts replays of the Dan Patrick Show and the Rich Eisen Show, along with events from Singapore-based MMA promotion ONE Championship.

If you don’t live in the U.S., the Revolution card is available on Fite TV.

Since Saturday’s AEW show is a PPV, there’s no legal way to get around the $49.99 fee to watch the card. Though spending $50 on a one-time pay-per-view event is pricey—especially since you can spend $9.99 per month to subscribe to the WWE Network and get all 14 of its annual PPVs included in that price—this isn’t the first time AEW has used this price point. As the Big Lead wrote in May, “That [price] is going to be a very tricky proposition for drawing the casual audience.”

AEW, though, is offering one match for free on B/R Live and the AEW YouTube channel during its The Buy In pre-PPV show that begins at 7:30pm ET. During that free half-hour of action, SoCal Uncensored will face The Dark Order.

The letter “c” indicates the champion.