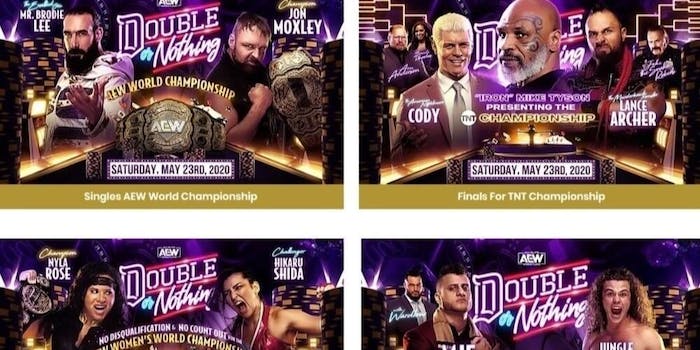 How to stream AEW Double or Nothing

Jon Moxley vs. Brodie Lee. Cody vs. Lance Archer. A Stadium Stampede. What more can you ask for?

For the first time since February, AEW returns to the pay-per-view airwaves. But this time, much like WWE’s Wrestlemania in March, the wrestling promotion will present Double or Nothing on Saturday from an empty arena. Yet the lack of fans hasn’t stopped the recent exploits of AEW heavyweight champion Jon Moxley, former belt-holder Chris Jericho and his Inner Circle colleagues, and the eight wrestlers who were competing in a tournament to crown the first TNT champion.

Although the pandemic prevented live sporting events for weeks, AEW still put on its weekly Dynamite show by moving operations to Florida and then pre-taping a month’s worth of shows before the coronavirus shut down the business. But now AEW has ramped up production for its Las Vegas show and put together an impressive fight card for its PPV telecast.

Moxley will defend his title vs. Brodie Lee, who has made a huge impact on the promotion after the character formerly known as Luke Harper left the WWE. Cody will face Lance Archer, who has been on a path of destruction since he joined AEW, in the finals of the TNT title tournament. A nine-man casino ladder match that will include Darby Allin, Colt Cabana, and Orange Cassidy will crown a No. 1 contender for the heavyweight belt, and former WWE superstar Matt Hardy will make his AEW PPV debut by teaming up with The Elite to face the heel team of Inner Circle in a Stadium Stampede match.

It should be a hellaciously fun experience.

“You have to respect anyone that perseveres through hard times,” Archer told Sports Illustrated while discussing his opponent for Saturday. “This business isn’t easy. There are a lot more valleys than there are peaks, so I respect how Cody has persevered through his valleys and his lows to become the face of AEW. It’s going to be my honor and privilege to kick his ass at the PPV.”

Here’s everything you need to know to watch AEW Double or Nothing.

AEW Double or Nothing

AEW Double or Nothing: How to watch

The only legal way to stream the AEW Double or Nothing PPV in the U.S. is through B/R Live, Bleacher Report’s live streaming service that shows everything from international soccer tournaments to national lacrosse events. It also broadcasts replays of the Dan Patrick Show and the Rich Eisen Show, along with events from Singapore-based MMA promotion ONE Championship. If you don’t live in the U.S., the Revolution card is available on Fite TV.

Since Saturday’s AEW show is a PPV, there’s no legal way to get around the $49.99 fee to watch the card. Though spending $50 on a one-time pay-per-view event is pricey—especially since you can spend $9.99 per month to subscribe to the WWE Network and get its annual PPVs included in that price—this isn’t the first time AEW has used this price point. As the Big Lead wrote in May 2019, “That [price] is going to be a very tricky proposition for drawing the casual audience.”

AEW, though, is offering one match for free on B/R Live and the AEW YouTube channel during its The Buy In pre-PPV show that begins at 7:30pm ET. During that free half-hour of action, Private Party will face Best Friends to determine the No. 1 ranked tag team.

B/R Live is available on Roku, Apple TV, Amazon Fire Stick and Fire TV, desktop browsers, and iOS and Android devices. You can also watch the show on your local cable system.

Double or Nothing fight schedule

The letter “c” indicates the champion.