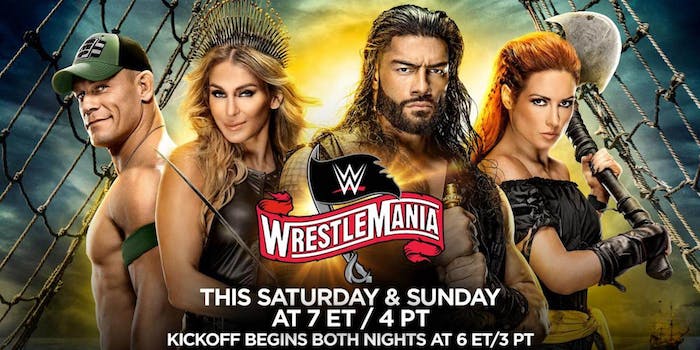 How to watch WrestleMania 36

Crowd or not, these wrestlers are still gonna shine.

This year’s WrestleMania makes history for two reasons: 1) It’s the first time ever that the popular wrestling event will be performed with no audience, and 2) It’s also the first time it will take place on both Saturday and Sunday. These changes are due to social distancing measures put in place because of Covid-19. However, if Vince McMahon is known for one thing, it’s that the show must go on (to which anyone watching Over the Edge in 1999 can attest).

All that said, I have a feeling that this year’s Mania will be worth watching if only because none of us have seen anything quite like it before. Sure, we’ve watched many a match with Brock Lesnar vs. some poor sod smaller than him and many a one really badass chick against another (although I must admit I have a special excitement to see Shayna Baszler come snarling for Becky Lynch). But I think we’ll see some of these wrestlers bring in their best performances this weekend, if only because they have a job to do—and doing it well will, at least for a few hours, help everyone think about something that isn’t a rising death count.

WrestleMania 36 live stream: How to watch online for free

WWE Network is the best way to get the WrestleMania 36 live stream if you want to watch these wrestlers go nuts in the ring. If you’re not already a convert, the news is good: You can get a month of the service free right now, which means you can watch WrestleMania 36 without paying a dime. After that, the service costs just $9.99 per month, but you can cancel anytime. Considering WWE Network lets you stream all 14 yearly pay-per-view events at no additional cost, that’s an incredible deal. Seriously, just think about how many times you’ve paid $60 to watch one PPV. For that same amount, you’ll get a whole year of WWE Network—and access to all past events. Between NXT, RAW, and Smackdown Live you’ll be able to watch all your faves hit the mat on a weekly basis, and you’ll also get access to documentaries, reality programming like My Son/Daughter Is a WWE Superstar, and originals like Wrestlemania Rewind.

Other ways to watch WrestleMania 36

If you have cable, you can order WrestleMania 36 from Spectrum, Cox, Xfinity, Verizon FiOS TV, Cable One, Dish Network and DirecTV for $59.99-$69.99. But given all of the benefits that come with WWE Network—not to mention the chance to get started with one free month—we’d highly recommend figuring out a way to stream WrestleMania 36 using one of the devices listed above.