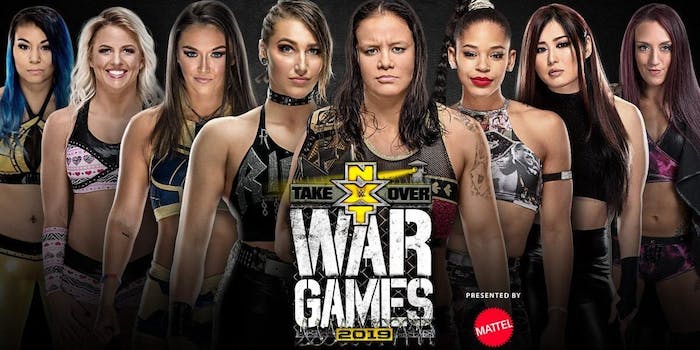 How to stream NXT TakeOver: WarGames

While the very first women’s WarGames event is more than enough reason to tune in to Saturday’s PPV, the NXT TakeOver: WarGames event has other excellent matches to offer. But before we get to that, let’s talk about the women’s WarGames roster: Rhea Ripley, Candice LeRae, Tegan Nox, and Mia Yim on one team, and NXT Women’s Champion Shayna Baszler, NXT U.K. Women’s Champion Kay Lee Ray, Io Shirai, and Bianca Belair on the other. That is a rip-roaring list of female athletes at the top of their games–AND they’re all going to fight each other. Grab the popcorn.

Outside of that mesmerizing showdown, we’ll also see Finn Balor wrestle his first NXT match in a very long time–and in a new persona, no less. As Balor recently said in an interview with WWE on Fox, “The Prince is back.” If any Balor fans have known him since his Prince Devitt days, they already know that he’s been a heel before– and if the way he kicked Johnny Gargano in the head on the Oct. 23 episode of NXT is any indicator, we have some great devilry to look forward to when he matches up against Matt Riddle on Saturday night.

The men’s WarGames ought to be a good watch as well—not just because it’s The Undisputed Era against Team Ciampa but also because the latter has a wild card to play. Depending on who’s involved could sway the results of the match and give Ciampa a clear shot at a win. On the other hand, Keith Lee and Dominik Dijakovic are not known for getting along, so one wrong move could mean chaos. Either way, it’s going to be a lot of fun to watch.

NXT TakeOver: WarGames live stream: How to watch without cable

WWE Network is the best way to get the NXT Takeover live stream if you want to watch these wrestlers blast each other in the ring. If you’re not already a convert, the news is good: You can get a month of the service free right now, which means you can watch NXT Takeover (and Sunday’s Survivor Series) without paying a penny. After that, the service costs just $9.99 per month, but you can cancel anytime. Considering WWE Network lets you stream all 14 yearly pay-per-view events at no additional cost, that’s an incredible deal. Seriously, just think about how many times you’ve paid $60 to watch one PPV. For that same amount, you’ll get a half-year of WWE Network—and access to all past events. Between NXT, RAW, and Smackdown Live you’ll be able to watch all your faves hit the mat on a weekly basis, and you’ll also get access to documentaries, reality programming, and original productions.

Other ways to watch Stomping Grounds

If you have cable, you can order NXT TakeOver: WarGames from Spectrum, Cox, Xfinity, Verizon FiOS TV, Cable One, Dish Network and DirecTV for $59.99-$69.99. But given all of the benefits that come with WWE Network—not to mention the chance to get started with one free month—we’d highly recommend figuring out a way to stream the PPV using one of the devices listed above.