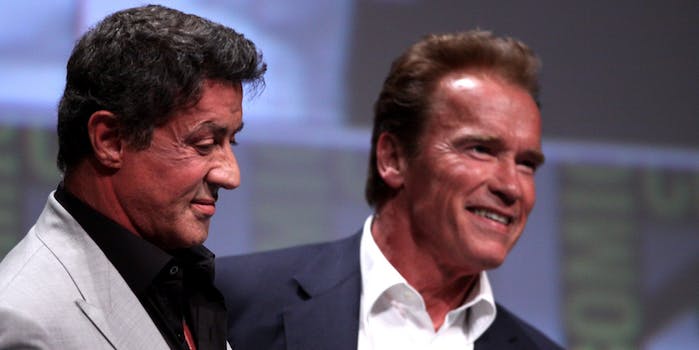 Can we send these celebs into cease-fire negotiations?

You know who never, ever needs to publicly weigh in on the Middle East? Sylvester Stallone. Justin Bieber’s manager. And the guy who directed The Exorcist.

But hey, they won’t let that stop them: These are just three of the nearly 200 Hollywood heavyweights—including Seth Rogen, Bill Maher, Aaron Sorkin, Arnold Schwarzenegger, and Sarah Silverman—who attached their names to an open letter condemning Hamas for threatening the “democratic values” of Israel. Because that ought to help.

The statement was crafted by Creative Community For Peace, an organization and shoddy website that represents “a cross section [sic] of the creative world” interested in preventing “cultural boycotts” of Israel. Though it laments the “devastating loss of life endured by Israelis and Palestinians in Gaza,” the blame for recent violence falls squarely on one side:

While we stand firm in our commitment to peace and justice, we must also stand firm against ideologies of hatred and genocide which are reflected in Hamas’ charter, Article 7 of which reads, “There is a Jew hiding behind me, come on and kill him!” The son of a Hamas founder has also commented about the true nature of Hamas.

Hardline neocons happily welcomed the support of “luminaries” they’d normally blast as liberal Jewish Illuminati, though much of Twitter was not so pleased.

.@Sethrogen Yeah like when Hollywood celebs like you put their support behind Israel’s slaughter of children in #Gaza pic.twitter.com/vhLNVke34y

Like downplaying the slaughter of +2,000 civilians trapped in Gaza, to whine about rockets on “Israel”, @SethRogen? https://t.co/G9XXsMgSUl

@SarahKSilverman You and Rogen are pro-Israel? Makes sense. Dead women and children are really a riot.

Is Israel a greater threat to innocent Palestinians than Hamas is to innocent Israelis? Yes, 100 times. @SarahKSilverman @Schwarzenegger

All that remains of 44 homes in Zafer 4. pic.twitter.com/x31I33ntfP

.@Schwarzenegger Signing Petition In Support of Israel. Truly Disappointing. I’ve Completely Changed My Mind About a Man I admired. #Gaza

Meanwhile, one or two producers have vowed to blacklist married actors Penelope Cruz and Javier Bardem for signing a letter against “the genocide perpetrated by the Israeli occupation army.” Oh, and here’s Joan Rivers taking a typically nuanced position:

We’re so glad that celebrities could wade into this mess and explain it for us nobodies.