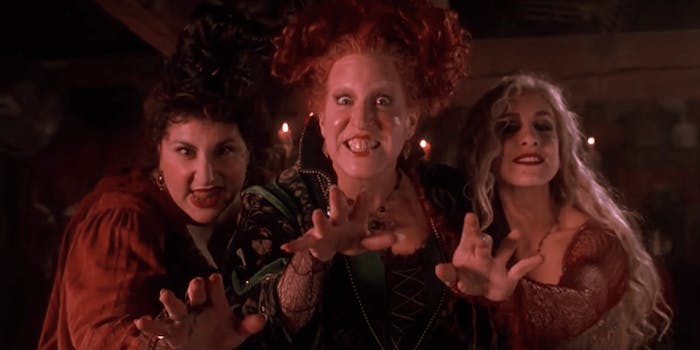 It's a witch's wish come true.

Workaholics writer Jen D’Angelo is on board to pen the screenplay, indicating that the new film will retain a good portion of the original’s campy, comedic charm. Sources tell Collider that the goal is to bring back original leads Bette Middler, Sarah Jessica Parker, and Kathy Najimy to reprise their witchy roles in some capacity.

None of the leading ladies are attached as of yet, but Disney is hopeful that they will sign on as the project develops further. It is unclear if Disney intends for the actresses to star in the sequel or if they will back up a new, younger coven.

There is no word yet if other actors from the original film—including Thora Birch, Vinessa Shaw, and Doug Jones—will be tapped to participate.

Released in 1993, Hocus Pocus tells the story of three sisters who were cursed during the Salem witch trials and mistakenly resurrected in the modern era. Fans can watch the film on Freeform until the end of October.

Though there is no firm release date for its sequel, Hocus Pocus will be available on Disney+ when it launches on Nov. 12. You can see a running list of titles the streaming service will release at launch.