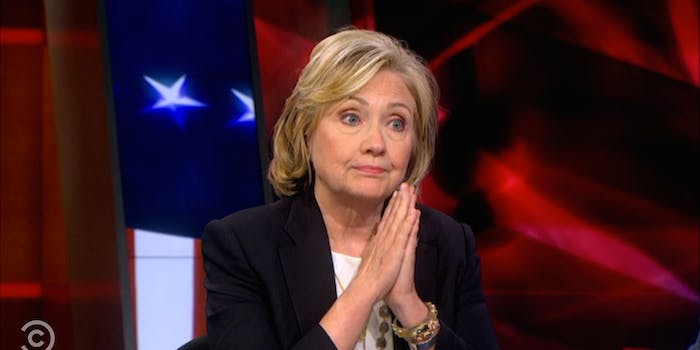 "This book is 656 pages of shameless name-dropping."

Hillary Clinton made a surprise appearance on The Colbert Report and finally answered some tough questions—or at least Stephen Colbert’s version of a tough question.

Colbert went on another one of his notorious attacks, this time on Clinton’s new book, Hard Choices, which he called “656 pages of shameless name-dropping.” While Clinton went on The Daily Show last month to promote the book and tease a presidential run yet again, she showed up unannounced to trade some words—or rather, square off in a competition of who can drop the most names.

Clinton’s not exactly known for her comedic skills, but she rolled with Colbert’s punches as he took her to task for the excessive name-dropping and the “hard choices” she wrote about. And when it came to answering the Internet’s favorite question, she had a pun-filled answer that doubled as a metaphor.

We still don’t have an answer to the president question, but she’s making the anticipation entertaining for the rest of us.