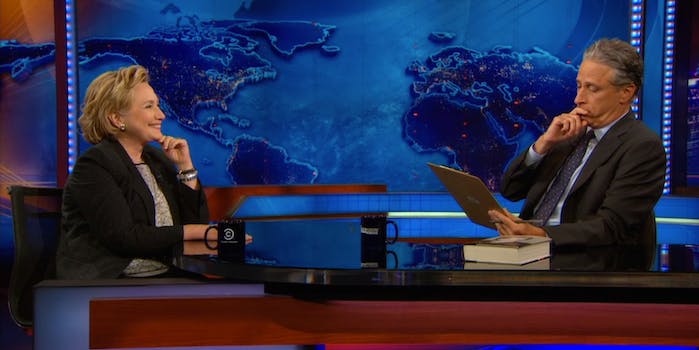 “I think I speak for everybody when I say no one cares. They just want to know if you’re running for president.”

Hillary Clinton has remained tightlipped about whether she plans to run for president in 2016 despite countless interviews, but that doesn’t mean Jon Stewart didn’t try to get it out of her.

She went on The Daily Show to promote her book, Hard Choices, but after humoring her about it for a minute or two, Stewart cut right to the chase.

“I think I speak for everybody when I say no one cares,” he said. “They just want to know if you’re running for president.”

Instead, Clinton played along with Stewart’s extensive questionnaire that asked loaded questions such as what shape she’d prefer her office and whether she’d rather sit in traffic or cause it.

While the interview took on a more serious tone, Stewart still managed to sneak in another presidential question. Chances are, if Clinton is going to run for president, she’ll probably milk this for as long as she can. She’s evidently still having fun with it at Stewart’s expense.