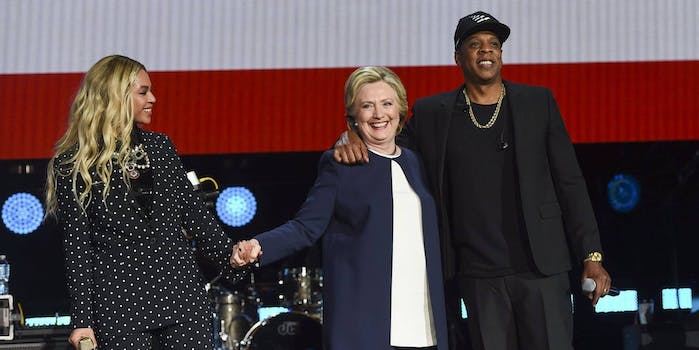 Jay Z put on a free concert on Friday night in support of Hillary Clinton. The Democratic presidential nominee has been receiving support from high profile celebrities throughout her candidacy, yet the Cleveland event was perhaps the most accessible for the common voter.

In addition to performances by Jay Z, John Bon Jovi, Chance the Rapper, Katy Perry, Steve Aoki, Big Sean, Ne-Yo, and Stevie Wonder, Beyoncé also made a special appearance, performing “Formation” and making her thoughts known on not just why you should vote but who to vote for.

“I want my daughter to grow up seeing a woman leading the country. That’s why I’m with her,” Beyoncé said, rocking a Clinton-inspired pantsuit along with her backup dancers, who all wore “I’m with her” shirts.

Clinton praised both Beyoncé and Jay Z for their music, calling the Lemonade singer an inspiration and applauding the illustrious rapper for his lyricism. She was certainly jazzed to meet the two before the concert.

.@HillaryClinton with JAY Z and Beyonce in Cleveland before the concert. pic.twitter.com/11IkkK8j8n

“Jay memorably said something we should all recall: Rosa Parks sat so Martin Luther could walk, and Martin Luther walked so Barack Obama could run, Barack Obama ran so all the children could fly,” Clinton said as she addressed the crowd later that evening. “Well we have unfinished business to do, more barriers to break and, with your help, a glass ceiling to crack once and for all.”