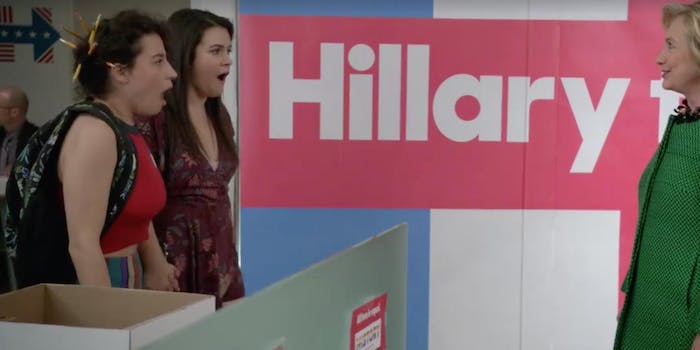 Here’s your first look at Hillary Clinton on ‘Broad City’

Get ready to gasp.

Hillary Clinton will be making a very special guest appearance on this week’s Broad City, and if the trailer’s any indicator, it will be an episode worth seeing.

A preview was released on the show’s Facebook page Tuesday, and in it Ilana gives Abbi a tour of Clinton HQ (where she’s been volunteering). Right when you think the tour’s over, in walks Clinton, green jacket tailored to the gods, double-winking at the ladies. It’s enough to leave both of our heroines speechless.

The only real question left for the episode to answer is how Ilana ended up a Hillary fan instead of feeling the Bern.