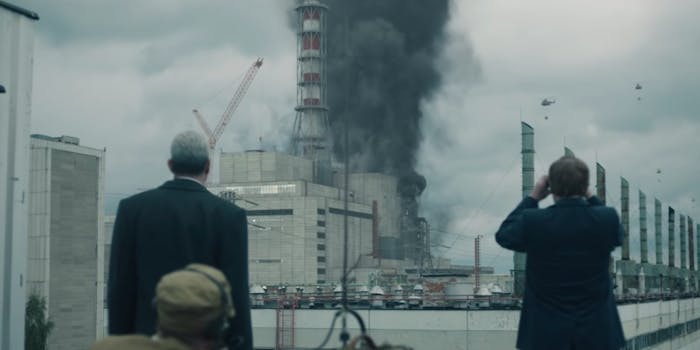 The United Nations' biodiversity report points to an impending ecological disaster that we refuse to alleviate—much like the Chernobyl catastrophe.

A potent line in HBO’s excellent new docudrama Chernobyl comes when a character ruminates on the aftermath of the well-known nuclear disaster: “The real danger is that if we hear enough lies, then we no longer recognize the truth at all.” Much went wrong at the Chernobyl Nuclear Power Plant, near the Soviet Ukrainian city of Pripyat, on April 26, 1986—mostly a result of gross, multi-layered incompetence. An aggregate of failures in physical design, unmitigated conceit, and state-regulated ignorance caused the No. 4 nuclear reactor to explode.

Of course, the immediate region became perilously contaminated, to the point that teams were created to shoot down pets and mitigate the spread. Hundreds of miles away, Geiger counters picked up high levels of radiation as plumes of fission products were released into the atmosphere. Charged from a fiery core that would rage for a week, changing winds and weather spread harmful particulate throughout Russia and Eastern Europe, even reaching as far as Western Europe.

Various directors promptly downplayed the disaster, mainly as a means to minimize a different spread—injurious news of Russian failure, because it simply could not be possible. The Soviets’ sanctioned death toll from Chernobyl has stayed at 31 in the decades since the catastrophe. Other calculations, however, estimate that the event perhaps caused at least 90,000 fatalities.

We now know—with the release of KGB documents stretching over 17 years—that it was much more than operator incompetence and state arrogance. Broad negligence throughout the construction of the Chernobyl, including the splitting of concrete layers per a 1992 report, laid a shaky foundation and created the proper conditions for the whole project to collapse into calamity.

What’s most interesting about HBO’s dramatization of the event isn’t just the immediate response, but in how the Soviets treated the accident as a viral boil that had to be cured and disposed of, posthaste. Moreover, those with any bad news about Chernobyl—especially the causes of its particular demise and the recognition of future problems—were rejected and isolated, regarded as a sprouting sickness from the boil.

Chernobyl was an unprecedented event, as is our current environmental crisis. It’s not a great stretch to call this crisis an existential, slow-burning Chernobyl—an inevitable disaster for which we have much advance information, but are increasingly unlikely to alleviate because we can’t reach a consensus on whether it’s even a problem. And much like the acute radiation illness that killed thousands in the aftermath of Chernobyl, we will have to reckon with the infirmities of our own age, exacerbated by the dysfunction and apathy of those in power.

According to a recently released summary of the United Nations’ upcoming complete report on biodiversity, species loss continues to accelerate at rates tens or hundreds of times faster than in the past. Humanity and its supposed progress have caused half-a-million species to exist in “insufficient habitat(s) for long-term survival.” These animals are likely to go extinct if we don’t restore hospitable habitats in short order—possibly within decades.

Lovejoy, though, is one of the scientists—not unlike Soviet nuclear expert Valery Legasov, played by Jared Harris in Chernobyl— who has been screaming at the top of his lungs about the damning contents of the upcoming report. That’s because he broadly predicted the UN’s findings decades ago. In what he called “the most basic issue of our time,” Lovejoy wrote in the foreword to Michael Soulé and Bruce Wilcox’s Conservation Biology, published in 1980: “Hundreds of thousands of species will perish, and this reduction of 10 to 20 percent of the earth’s biota will occur in about half a human life span.”

But when you have company line followers like Unites States Secretary of State Mike Pompeo simultaneously omitting climate change and expressing excitement for the possibilities of “steady reductions in sea ice,” it’s evident that humanity’s most significant hazard will be here to claim the other 80 to 90% of the earth’s living a lot sooner than later.

There’s a particular horror, illuminated in Chernobyl, related to the connection between the preservation of the state apparatus and its manifestation on the ground, as leaders actively deny, in real time, that a disaster exists. In their attempts to contain the catastrophe, an unnamed apparatchik suggests sealing off the city, which will put thousands of powerless people in imminent peril.

“No one leaves,” the old man says. “We cut the phone lines. Contain the spread of misinformation. That is how we keep the people from undermining the fruits of their own labor.”

Like reactor No. 4 and the conditions of its construction and destruction, we’ve built a world fraught with foundational error. As we continue to deny facts and spread misinformation in order to save face, one has to wonder how the “fruits of our own labor” will manifest themselves in regards to the environment. Who will be devoured by the bubbles and echo chambers we will inevitably create along the way, supposedly saving a world that may already be too far gone?