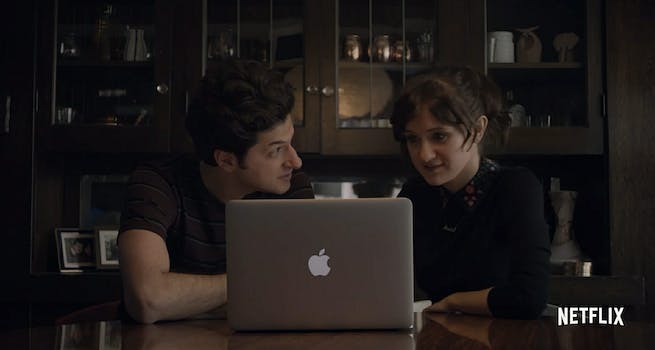 Romance is easy. Love is hard. Romantic comedies are even harder.

Early in Netflix’s Happy Anniversary, Mollie (Noël Wells) tells her boyfriend Sam (Ben Schwartz), “I just want the most-perfect version of imperfectness.” If that line doesn’t make your skin crawl, your tolerance is stronger than most.

The rest of Happy Anniversary is spent testing the audience’s tolerance for a couple who can’t break up fast enough. This sweet-and-sour rom-com marks the directorial debut of Jared Stern, who also wrote the script. The sour parts of Happy Anniversary end up being the movie’s highlights and the sweet parts are as sugary as an ice cube.

On Sam and Mollie’s third anniversary the couple kicks off their big day by fighting about their future. The movie cuts back and forth between the couple’s beginning and their possible ending. Sam is indecisive, Mollie is idealistic, and the rub is that neither really knows what they want. The more we learn about the couple, the less we care about their future together. The movie’s evidence in favor of a breakup is much stronger than the case for staying together.

Schwartz and Wells are likable performers, but their charm can’t save Sam and Mollie. They don’t have to be likable characters exactly, but that doesn’t hurt in a movie that wants you to be on their side. The bigger problem is that they are uninteresting. One moment Sam tells Mollie that it’s called falling in love because it hurts, then later he laments the loss of a boring, uneventful relationship. It would’ve been great if Mollie had called out this hypocrisy. It would’ve been a breath of fresh air. In the end, we’re left with two characters who are more enjoyable to watch with the supporting cast (including Joe Pantoliano, Rahul Kohli, and Kristen Bauer van Straten) than each other.

I respect the risk Stern takes by letting the characters be ugly with each other. Striking the right balance between emotional honesty and formula is tough. It tips too far in one direction then over-corrects. If you’re onboard with Mollie and Sam, then Happy Anniversary will satisfy. If you grow tired of them you’ll start thinking about the better options out there.

Romance is easy. Love is hard. Romantic comedies are even harder.