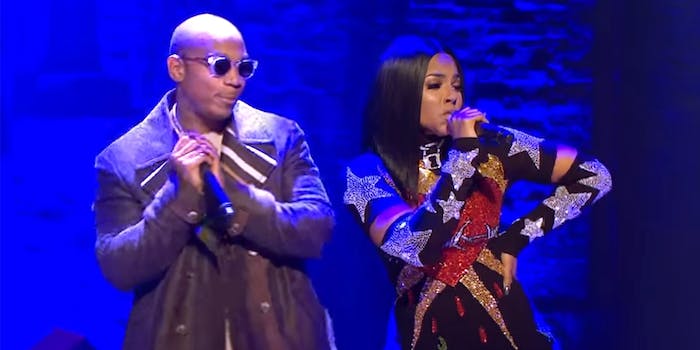 CD, vinyl, and cassette versions are on the way.

After weeks of anticipation, teases, and even a few live performances from the Hamilton Mixtape, we no longer have to wait for it.

The Mixtape as we know it today, which is a collection of remixes, demos, and creative covers from Lin-Manuel Miranda, the Roots, and a multitude of artists, had been in the works for around two years once Busta Rhymes saw the show. But when Miranda was inspired to write about Alexander Hamilton, he envisioned it as a mixtape long before he saw it as a musical—and even then Mixtape was in the name long into the process of making the smash Broadway show.

After Hamilton became a smash hit, the man was nonstop as artists signed up to work on the Hamilton Mixtape; he not only got his dream choices but also real-life inspirations for Hamilton characters like Busta Rhymes for Hercules Mulligan, and Queen Latifah for Angelica Schuyler.

He slowly released seven of the 23 tracks ahead of the album’s release—and eventually the album itself—on what he called the “New Year’s Day Drop,” or midnight wherever you are. While initially confusing fans, they eventually got it as they saw Miranda’s retweets of fans all over the world slowly discovering what everyone in time zones ahead of them had been freaking out about.

In anticipation of the release of The Hamilton Mixtape, the Richard Rodgers Theater hosted a special #Ham4Ham featuring performances from some of the artists—including Regina Spektor and Ben Folds’ “Dear Theodosia,” and Andra Day’s “Burn”—which were previously unreleased.

By the time U.S. fans got their hands on the Mixtape, much of the world had already listened to it on repeat. But now everyone can jam along. Like the songs before it, The Hamilton Mixtape is available on all major streaming platforms with CD, vinyl, and cassette versions (yes, really) on the way.

You can listen to the entire album on Spotify below.

If you’re wondering if there’s a certain order to listen to it in? Miranda has you covered.

LISTEN IN ORDER LIKE I HANDED YOU A 90 MINUTE MAXELL CASSETTE.
I love you SO MUCH for asking. https://t.co/LYBGfUijUJ