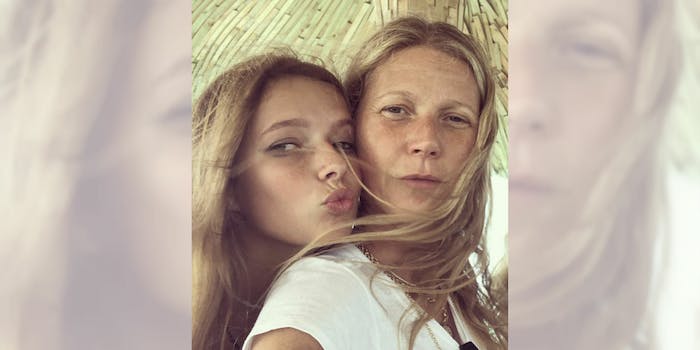 'Don't need to break the old internet again, now do we?'

Gwyneth Paltrow on Tuesday shared a screenshot of text messages with her daughter, Apple Martin, regarding their online privacy spat on Instagram. In March, we learned that Paltrow needs Martin’s consent prior to posting any images of her online.

Ahead of Martin’s birthday this week, Martin shared some photos with her mom via text that were pre-approved for Paltrow to share.

“Here are some options of Apple-approved birthday posts,” Martin said in the text.

Paltrow thanked her daughter, then quipped, “Don’t need to break the old internet again, now do we?” Martin agreed.

Paltrow was referring to an incident back in March when she posted a skiing photo of her and Martin to Instagram. It was a normal enough mother-daughter vacation photo, but it raised privacy concerns after Martin left a comment on the image.

“Mom we have discussed this. You may not post anything without my consent,” Martin commented at the time. The photo is still available on Instagram.

“You can’t even see your face!” Paltrow replied to Martin’s comment. The exchange sparked a huge debate regarding children’s rights regarding online privacy. Many people defended Martin.

“I can‘t believe that you as her mother think it‘s OK to post this without her consent because we barely see her face. That’s not anybody‘s decision, but your daughters,” one Instagrammer replied.

Some backed Paltrow’s decision, dubbing her as nothing more than a doting mother, and thought Martin was being overdramatic.

“Your daughter needs to get over herself she’s your kid parents do this kind of thing all the time,” another Instagrammer said.